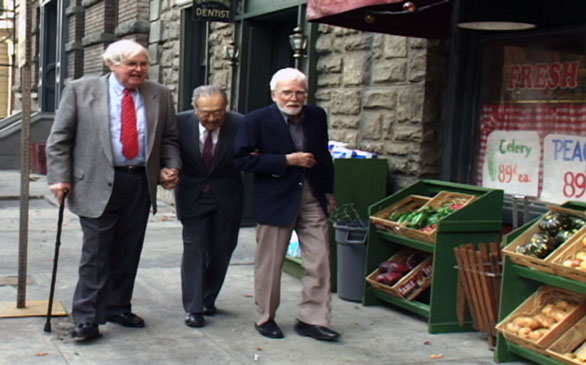 Melancholy is the word that comes to mind. Whoever said change was exciting has never been old. I don’t mean old as in 25 years of age. I mean 100 years old, weak and feeble and frustratingly unable to do the things you once took for granted. People say it’s an ugly part of life, but you just don’t know until you’ve had the energy and physical capability swept right out from under you. When you do get there, the only things that seem to hold your hand through the heartache of a decomposing body are the wonderful memories of what once was.

In the case of Robert “Bob” Boyle, life’s memories are eternally captured and kept safe in the many films he’s worked on. A renowned art director who worked on five of Hitchcock’s films (including North by Northwest and The Birds), Boyle is in his mid-90s and still kicking it with his friends in the industry. Henry “Bummy” Bumstead and Albert Nozaki were also art directors for films like To Kill a Mockingbird and The Ten Commandments, respectively.

The three pals, who met in college where they all were architecture majors at the University of Southern California, have worked, played and now grown old together. This documentary, which contains footage shot intermittently between 1999 and 2009, takes them back to their old stomping grounds: the trio visit the Paramount back lot where they spent so many years behind the scenes, and Boyle travels back to Bodega Bay where he set The Birds.

Also in their clique are legendary cinematographers Conrad “Connie” Hall (think Butch Cassidy and the Sundance Kid) and Haskell Wexler (Who’s Afraid of Virginia Woolf?) as well as storyboard artist Harold Michelson (The Graduate). Interweaving sketches, clips from the films, black-and-white snapshots and exclusive interviews, the documentary is a moving tribute to the men who brought the magic to Hollywood.

Something’s Gonna Live is in many ways a sad story. I used the word melancholy before because there is a constant sense of the inevitable end. Like every good movie must reach its credits, so must the lives of the fab six who we learn to passionately admire (After all, they are allowed to call famed director Alfred Hitchcock by the endearment, Hitch.).

But as sad as the film may leave you, there is some optimism, some hope for the future. If you listen closely enough to your elders, you too can make something that is gonna live forever.