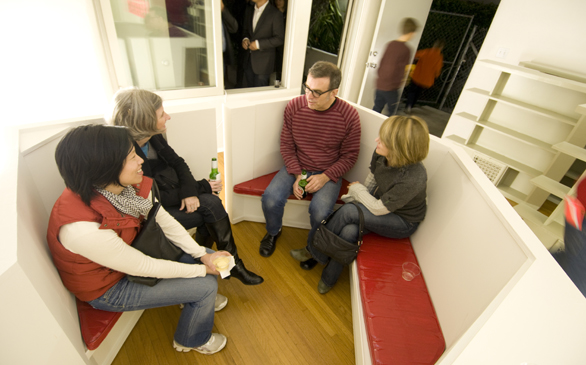 What do South Los Angeles gang members and a modernist Austrian fashion designer have in common? Probably not much unless you’re Felix Burrichter and Sarah Ortmeyer.

To the two European-born artists currently living as a residency team in one of Los Angeles’ most architecturally stunning apartment buildings, the link is simple – Rudolf Schindler. As part of a final exhibition project they must present at the end of their six-month stay in Los Angeles, the duo is creating a publication-scrapbook centered around Schindler, the pioneering Austrian architect of their current living space.

“You have a large Vienna-Los Angeles link with the Schindlers,” Burrichter says of Rudolf and his wife Pauline, “[and so] we are spinning tangents and stories from there on things we’ve picked up since we’ve been here.”

The connections Burrichter and Ortmeyer are making between the two urban cultural hubs is a natural extension of the residency program they are participating in, itself a testament to the longtime cultural exchange that has existed between the cities.

In 1994, Vienna-based MAK–Austrian Museum for Applied Arts/Contemporary Art acquired use of Schindler’s original residential design – a house on Kings Road built in 1922 as a live-work space – for the purpose of establishing a Los Angeles satellite of the museum. Now home to the MAK Center for Art and Architecture, the structure expands on the organic designs of Schindler’s former mentor Frank Lloyd Wright and features living quarters for two separate families, artist studios, a communal kitchen area and, most striking, seamless integration of indoor and outdoor spaces. Known internationally as the Schindler House, it is considered the first house to be built in the modern style and has undoubtedly influenced generations of California architecture.

In 1995, the Republic of Austria acquired another structure by the prolific architect for the MAK Center – the Pearl M. Mackey Apartments, built in 1939 – and established it as one of the United States’ premier artists-in-residence centers. Continuing both Schindler’s ideologies and practices, the MAK Center uses its five (originally four) recently renovated apartments as a base for its live-in program, a scholarship given to visiting artists and architects who are exploring the increasing dialogue between the two creative disciplines.

Since 1995, October and April of each academic year welcomes four new residents – two artists and two architects, or teams counting as one “resident” – who move in to the Mackey’s spacious, functional units, which have become laboratories for Los Angeles-inspired works. Residents are chosen during a rigorous judging cycle (which this year drew from 177 project applications from 33 different countries) in which their proposals are assessed for their ability to engage with the city and contribute to the ongoing discussion of art, architecture and where they intersect. All recipients are young, many are European, some are still students and most have never been to Los Angeles before; yet just as Schindler’s avant-garde-for-the-time designs inspired future students of his field, the Mackey residents have a reputation of enriching the ongoing dialogues of interdisciplinary experimentation.

Which brings us back to Burrichter and Ortmeyer, both of who are in the program’s 30th group of residents. Though they are both practicing artists (She works internationally with found images and site installations, and he publishes a magazine “for architectural entertainment” out of New York.), the team weaves interdisciplinary elements into their project at every opportunity. During a visit at the end of July, the two talked of photographing architecture as you would a regular portrait and taking pictures of furniture like you would a building.

“It gives you a different perspective,” Burrichter says. “[Like how] for Schindler, he didn’t make a distinction between furniture and design or architecture and design – it was all one.”

Living in the apartment next door for the summer is another program resident who is blurring the lines between art and architecture. Markus Zeber, a 31-year-old from Vienna, was trained as an architect, but his output today is mostly artistic. Though he once practiced traditional architecture – designing a castle expansion, among other things – the politics of the industry led him to instead begin responding to his macro-level ideas through architecturally approached art.

“My work started with thinking about building with model symmetric bricks – mass production,” Zeber says from his Schindler-designed kitchen’s built-in table, “and then goes more and more into electric gadgets until you get these [reads off a Post-it in which someone has translated his description from German into English] ‘poetically pathetic kinetic sculptures.’”

The “structures” he refers to are strewn around his living-room-cum-white-walled workspace, but they look more like futuristic MacGyver-assembled robots than structures in the traditional sense. There is one made of two megaphones wired together with two exposed light bulbs. When he plugs the contraption in, it begins to warm up with a loud buzzing sound. After a minute, the mechanics Zeber created go to work and its two symmetrical sides begin a spontaneous back-and-forth dialogue, shooting Morse code-like rapping sounds from the megaphones as the light bulbs flicker on and off in a way that not even Zeber can predict.

“It’s not monotone noise – it’s more rhythmic,” Zeber says. “But it’s still the kind of sound that has no structure, so it’s always a live performance.”

By piecing together found objects with gutted electronic devices, Zeber attempts to answer questions raised about how to find individuality in a world full of mass production. Since Los Angeles’ citizens are so closely identified by the products they buy, his focus during the residency has been on finding innovative ways to rework everyday items – such as fly swatters, flood lights, milk cartons and wire hangers – to assert originality in such a uniform landscape.

The last two current Mackey residents – all of whom will be showing their final projects at an exhibition inside the Schindler house – have also latched on to the idea of Los Angeles as a problematic locale. German artist Mandla Reuter holds site-specific, architectural-based solo shows all around the world and is exploring the complexities behind owning empty land in Los Angeles while India-based practicing architect Zameer Basrai is using three locations around the city as sites in which to dissect the idea of public space, a term that has long eluded the City of Angels.

During their six months in Los Angeles, the residents are under stipend funding from the Austrian government, the Federal Ministry for Education, the Arts and Culture of the Republic of Austria and MAK Vienna. But with no set schedules or daily expectations the artists and architects living at the Mackey apartments are unfettered by the pressures of many residency programs.

The program’s unrestricted mentality is no coincidence. The United States’ relatively young history has long put it on the art map as a powerhouse for creativity with Los Angeles, in particular, being its quintessential nothing-to-lose city. In addition to Schindler, Richard Neutra and other modernist architects who used the growing city as a laboratory for new, experimental forms, scholars from all disciplines have come to Los Angeles to create discourse on subjects traditionally untouched in Europe. It’s no wonder: the city’s laid-back atmosphere – as opposed to New York’s hectic bustle – is a perfect location for artistic introspection.

“Everyone here is very free of baggage,” Basrai says. “There is no history to hold onto and it’s refreshing. Most European countries ... are grounded in ideology so strongly that they can’t be critical anymore.”

The MAK Center for Art and Architecture provides not only programs with which artists and architects can take advantage of the city’s built-in creative freedom, but also spaces in which this freedom can be displayed and discussed, and its family of locations is constantly expanding. Since acquiring access to both the Schindler House and the Mackey Apartments in the mid-’90s, MAK has expanded to include the 1936 Fitzpatrick-Leland house on Laurel Canyon (now home to the Urban Future Initiative, which also offers its own fellowship program) and, more recently, the Mackey apartments’ recently renovated garage structure.

After adding a 750 square-foot multi-purpose room atop the building’s five garage structure, the MAK Center unveiled its most recent art exhibit: Fractional Systems: Garage Project II (runs through Sept. 25). Curated by Peter Noever, Director of MAK Vienna, the exhibit had artists and architects from both Austria and Los Angeles transform the five garages and second-story space (dubbed the garage top) into site-specific dioramas.

Responding to the garage as both a functional and symbolic location, participants Raymond Pettibon, Franz Graf, Hernán Diáz Alonso, Elke Krystufek and architectural team the next ENTERprise constructed environments inside the one-car garages that range from minimal (Krystufek hung a simple gold charm on the back wall.) to chaotic (Pettibon’s looks like a typical unkempt, trash-and-debris-filled American garage.).

The new structure’s purpose is twofold. As a gallery and event venue, it extends Schindler’s principles of open, communal design; but as a functional structure, the garages will be used as studio space for future Mackey residents.

The connection between Vienna and Los Angeles may be politically weak, but our cultural partnership is one that can’t be denied. Through MAK Vienna’s work at establishing and expanding its Center for Art and Architecture, Los Angeles is now home to an internationally renowned cultural institution. And through its numerous exhibitions, lectures, restoration projects and scholarship programs, the progressive dialogue started by Schindler nearly 100 years ago is being channeled and built upon by a new generation of artists and architects.