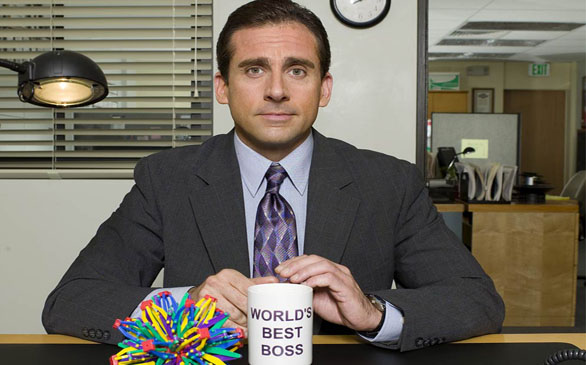 Steve Carell is planning to leave “The Office.”
(Credit: Courtesy of NBC Universal)

Fall is always an exciting time for me. With school starting, old friends return and the vibrant colors of the foliage outside is just as wonderful as the colors and storylines coming back to primetime television for 2010. Expect to see some milestones happening this season with many shows gearing up toward some type of finale in the near future.

One of the most-talked-about is Steve Carell’s departure from “The Office,” with this season being his last. You have to wonder what the show’s creators are going to do when the heart of the show says farewell. Even without Michael Scott, there are enough big personalities and storylines to fill the boss’ absence, so it will be up to the writers to really step it up next season.

But the storylines for “The Office”’s Season 7 fall premiere on Sept. 23 promises the continuing manhunt for who leaked to the press Sabre’s malfunctioning fire-breathing printers. Kathy Bates reprises her role this season, and there’s also the surprise return of Holly, which might signal a very interesting romantic plot for Michael. Will they end up together before he leaves? I’m stoked to find out.

Now in its sixth season, my favorite show of all time, “How I Met Your Mother,” is actually giving us a flash forward to married Ted in its premiere episode Sept. 20 on CBS. Fans of last season were left disappointed at the uneven and random storylines, and the show’s creators promise that this will be a season of redemption.

Rachel Bilson reprises her role as the roommate to “the Mother,” and there’s talk that Robin Sparkles is back, though the show’s creators are acting hush-hush to the development of Robin’s character this season. The main plotline, however, involves Ted’s commission to design a new building for Goliath National Bank, which puts him at odds with a woman protesting the destruction of the building the bank replaces.

Will this finally be the mother we’ve been waiting so patiently for? With the show rumored to last until Season 8, the show’s creators are gearing their storylines toward a tangible finale that brings us ever so closer to finding out whom Ted finally settles down with.

Changing channels to the CW, the only show that’s really kept my attention has been the super dramatic but extremely stylish “Gossip Girl,” premiering Sept. 13 (C’mon, I’m a girl. I’m allowed to go gaga over the hot boys and pretty dresses that this show offers.).

There were some pretty big cliffhangers last season. Jenny was somehow banished, and Chuck was left dying on the street after a failed proposal to Blair. Dan and Georgina having a baby? Umm, should make for a funny episode. And Blair and Serena are out gallivanting in Paris where, according to Internet buzz, old rivalries for “Queen B” resurfaces when both girls are scheduled to attend Columbia in the fall. Apparently, this bitter battle for “Gossip Girl” queendom ends with a big splash … in a fountain … in Paris.

Speaking of a splash, and a lame attempt at a transition, the 2010 remake of CBS’ “Hawaii Five-O” looks to be amazing (premieres Sept. 20). The cast is certainly pretty. We’ve got “Lost”’s Daniel Dae Kim playing a Hawaiian local whose knowledge of the island’s people and culture will be of great use in solving beach bum crimes.

The plot is relatively cliché, you know the whole elite police unit solving crime in a big, interesting location. However, the show’s legendary opening song – and the premise of hot beach dudes and babes – has me ready to say, “Book ’em Danno!”

Lastly, “Modern Family,” now an Emmy Award-winning sitcom (and definitely deserving of it) premieres Sept. 22 on ABC. According to blog Zap2it.com, there will be a big earthquake episode where we will watch, and probably laugh, at the way each character handles the situation (I’m looking at you, Phil.). We will also see a guest star coming in to fill the role of Cameron’s mother.

So there we have it; my picks for fall. There are just too many good shows on this season, including “Glee,” “90210,” “Chuck” and “House.” I swear, begin setting your TiVo now.