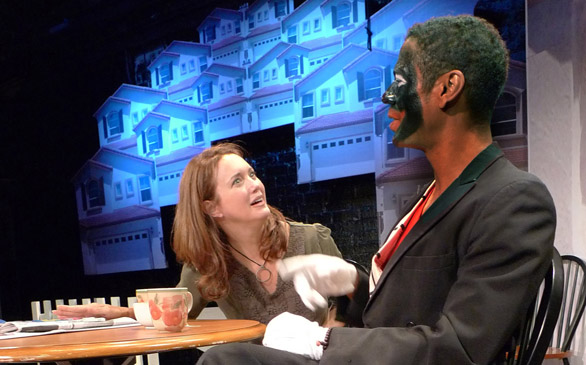 The golden rule “Love Thy Neighbor” takes on a whole new meaning with the controversial and thought provoking play, “Neighbors.”

Richard (Derek Webster) has devoted his whole life to working his way to the top and leaving his past behind. That past is revisited with the arrival of his new neighbors.

“Neighbors” is fittingly subtitled “A Play With Cartoons.” When I first read this before the play began, I was confused as to how that was possible. How can a play be a cartoon?

It was not until the opening scene where Topsy (Daniele Watts) comes out with a box of white baby dolls and begins dancing with them and throwing them around that I began to see how.

Albeit redundant to say, the entire ensemble cast was astonishing. Rachae Thomas (Melody) was brilliant as the rebellious teen full of angst, spunk and a warped sense of humor. Julia Campbell (Jean) was genius on stage as the Stepford Wife experiencing an unexpected breakdown. Her performance truly stood out (and not just because she was the only Caucasian on stage).

The Crow family is something else altogether. Baadja-Lyne ( Mammy) holds the show together with her authoritative and endearing character. The charming James Edward Shippy (Jim) and Leith Burke (Zip) both steal the audience’s hearts as well.

The play undeniably crosses a lot of racial lines. Nataki Garrett directs this West Coast premiere to great effect. Visually, the show is tremendously pleasing. I don’t believe one person in the audience could claim boredom. The show moves at a great pace as it hits on just about every racial stereotype.

Other than that, “Neighbors” is beautifully executed. It’s not easily described on paper. It is one of those shows you have to see to understand what all the fuss is about.