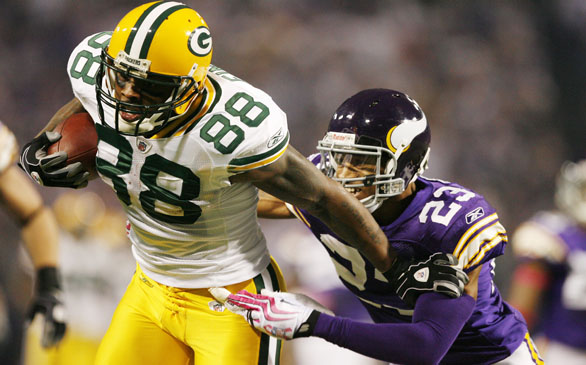 I don’t want to overstate this, but fantasy football is the biggest thing to happen to professional football since the invention of the forward pass or the three-team parlay. Hell, they could make the ball square and it wouldn’t have as much of an impact as fantasy football has had over the past 10 years.

But fantasy football isn’t just about running your own team and smack talking your friend who drafts three tight ends. It’s a test of your intellect, your decision-making and your patience. It’s chess with shoulder pads, war without all the blood and guts and stuff. It takes your ego to the altar and leaves it for the bridesmaid, week after week, yet you come back for more. It’s a sadomasochistic relationship with no safety word.

Now, are you ready for some fantasy football?

My original idea was to provide my “Ten Commandments of Fantasy Football.” However, seeing as how you people regularly disregard the real Ten Commandments (I see you out there coveting!), I’ve scrapped that idea.

Today I want to talk about the phenomenon known as the Man Crush.

It happens every year to every owner. There are one or two players in the draft who have caught your eye. Maybe you had your eye on them last year but they were with another team, so you’d flirt with them, innocently. Now, it’s a new season, they’re a free agent and you HAVE TO HAVE THEM!

You pray to each and every god that he will be there when it’s your turn to pick in the draft. You crave him, you covet him, you love him.

Just like a real-life crush, you can be crushed worse if you DO get your man, then if you don’t. Either way, you’ll try, try again, because crushes, like fantasy football, are out of your control.

So, let’s take a position-by-position look at who I’m Man Crushing this year. Keep in mind, I’m not suggesting these players should be taken before obvious stars like Chris Johnson, Drew Brees or Andre Johnson. But if the big boys are all gone and you’re looking for strong upside value, and if you’re able to manage the highs and lows, these guys may be for you.

QB – Jay Cutler, Bears: His offensive coordinator, Mike Martz, never met a pass he didn’t like. He will probably throw 600 times this year; will have a five-interception game but will also have a five touchdown game. He is the ultimate heartbreaker.

RB – Jamaal Charles, Chiefs: A Chris Johnson clone who can only be stopped by his coach. Talent-wise, he should get 400 touches this year but will probably get much less. Still, what he can do with those touches…

WR – Roddy White, Falcons: He’s already an elite receiver, but most people don’t know who he is. Let someone else take the bigger name (Reggie Wayne, Larry Fitzgerald) while you get better production from White.

TE – Jermichael Finley, Packers: Seriously, I don’t think I’ve Man Crushed this bad, ever. I may name my first-born son (or daughter) Jermichael. I’d go on, but my girlfriend will be reading this and I’m just about to cross a line one cannot easily uncross.

Defense: Normally I don’t care about defenses, but the 49ers get to play the Rams, Seahawks and Cardinals twice, so that just makes my mouth water.

Kickers: Who cares about kickers?

I know you will have your own Man Crushes, so if you have a chance to get your man, do it! Remember, it’s your team and your fantasy so have fun and, like my man Steve Smith, play angry!

About the author: Scott Bedno has been commissioner of his fantasy football league for the past nine years. He is pretty sure fantasy football has cost him at least one long-term relationship. He is OK with this.