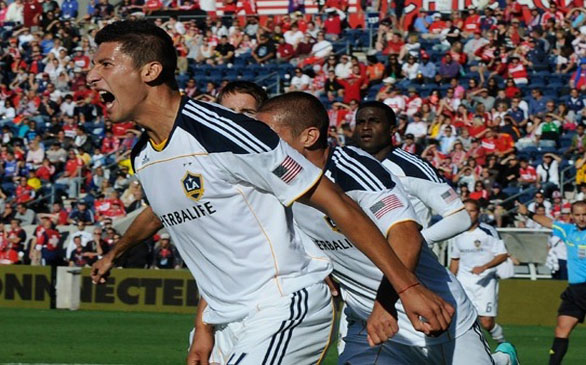 English star player David Beckham announced he is set to return to the pitch this coming Saturday, and it comes at a time when the Galaxy need an uplifting change.

Los Angeles managed only a draw on the road against the Chicago Fire over Labor Day weekend, and it has cost them in several areas. First of all, the Galaxy (13-5-5, 44 points) only hold a one-point lead over Real Salt Lake in the Western Conference. Second, they are no longer the sole holders of the MLS’ best mark as the Columbus Crew carry an identical record.

The 1-1 tie in Chicago came seconds before the match ended, as defender Omar Gonzalez headed a corner-kicked ball from midfielder Landon Donovan. Chicago had netted their goal moments before Los Angeles knotted the score.

“I think we aren’t going to complain when we put ourselves down in the 88th minute and we get out of here with a goal; I’m going to take it,” Galaxy head coach Bruce Arena comments on lagalaxy.com. “It was a day where obviously if we were a little bit better, we’d get the three points today.”

Donovan could have easily controlled the tempo of the contest, but Donovan failed to score on a penalty kick and via a one-versus-one with the Fire keeper. Both opportunities came in the first half, which featured an ejection of a Fire player. The Galaxy outshot their hosts 20-9.

Beckham looks to make his season debut with the Galaxy on Saturday, Sept. 11, as they entertain the Crew at the Home Depot Center at 7:30 p.m.