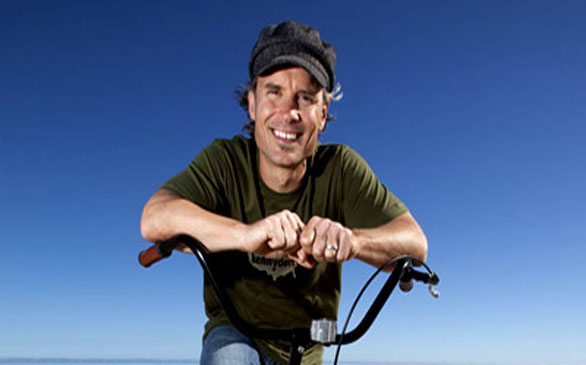 Kenny Livingston of Orange County band Good Man Down has been on the road for over a month and a half now, but not in the band’s van. Livingston took off from the Hermosa Pier back in July on a beach cruiser bicycle headed for Kitty Hawk, N.C., on a mission to inspire his fellow Americans, through example, to change the way they approach personal health, nutrition and lifestyle choices. For the immediate future Livingston is hoping the ride raises lots of money to go to providing better school lunches and for cancer research and is asking those who are able to make a donation at LivingTheDreamFoundation.org. Find out where Kenny is today by visiting KennyDoIt.org.

Mogwai is Burning for You

Seminal Scottish rock band Mogwai has just released their first official live concert film, Burning. The film was shot during the band’s three-night sold-out residency at Brooklyn’s Music Hall of Williamsburg in April 2009. Directed by Vincent Moon and Nathanael Le Scouarnac (La Blogotheque’s Take-Away Shows), the film presents itself as a modern urban-noir thriller; a black-and-white journey starting on the same New York City streets that Bernard Hermann scored for Martin Scorsese where manholes hiss steam, taxi headlights flare in the camera lens and strangers wait in street corner shadows. Moon and Le Scouarnac call their Mogwai film an “experience of the senses; a lifetime of feelings in just one night.”

Find out what they mean when Burning screens at the Echo on Sept. 12 at 8 p.m. Admission is free. The Burning DVD and its companion album, Special Moves, are available now.

September has been designated as National Yoga Month, and Putumayo World Music has put together a compilation to help further soothe you as you rejuvenate with Downward-Facing Dog and other yoga poses. Yoga instructor and musician Sean Johnson, founder of Wild Lotus Yoga studio in New Orleans, helped select the cuts found on Yoga, including contributions from Senegalese singer Ablaye Cissoko, Bhutanese monk Lama Gyurme, bhajan and kirtan singer Karnamrita Dasi and British producer Niraj Chag.

Krishna Das, the best-known U.S. performer of traditional Indian kirtan-style music demonstrates call-and-response chanting on the Dub Farm remix of “Hanuman Baba” and Wah! sings a tranquil verse that is believed to bring bliss to all who chant it. Johnson and his Wild Lotus Band also contribute melodic chanting in the form of “Om Hari Om/Sharanam Ganesha (Refuge).” Yoga drops on Sept. 14.

Iconic singer Greg Graffin of punk rock band Bad Religion is about to release his new book, Anarchy Evolution: Faith, Science and Bad Religion in a World Without God. Most music fans probably think of Graffin as just the rebellious lead singer of the legendary punk band but the rocker is also quite the brainiac – he earned a Ph.D. at Cornell University and teaches evolution at UCLA.

The book is said to wed Graffin’s experiences in punk culture to the academic world and explore the deep connection between art, religion and science. Co-authored with science journalist Steve Olson, Anarchy Evolution drops Sept. 28, the same day that Bad Religion’s The Dissent of Man releases. A limited number of autographed copies of Anarchy Evolution are available for pre-order at AnarchyEvolution.com.

Another Sip of Bitches Brew

Miles Davis’ landmark Bitches Brew album has turned 40 years old but it has lost none of its cachet; the 1970 release is widely given credit for being the album that brought jazz into the commercial rock era and stands today at No. 94 on Rolling Stone’s list of the “500 Greatest Albums of All Time.” The just-released Bitches Brew: Legacy Edition is a triple disc set that contains CDs holding the original album, plus six previously unreleased alternate takes and edits and a performance DVD from a 1969 concert in Denmark.

The super-deluxe 40th Anniversary Collectors Edition box set, due Sept. 14, includes all of the above, plus a 1970 concert on CD, the original album on two 180-gram vinyl discs in a gatefold jacket, a 48-page color book, a fold-out poster and a memorabilia envelope.