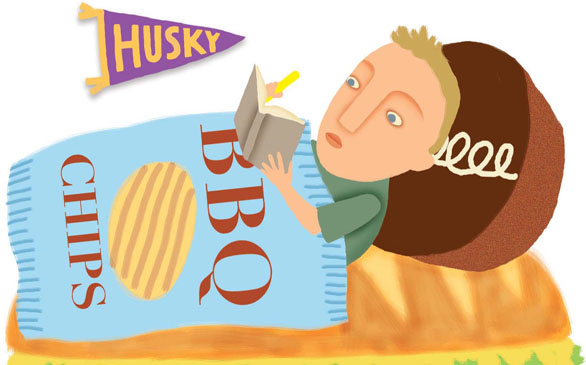 The freshman 15 can sneak up on students.
(Credit: Michelle Kumata/ The Seattle Times 2005/MCT)

College brings a slew of changes to a young person’s life. The freedom to make one’s own decisions may carry a lot of excitement, but can also provoke unforeseen stress. In times of adversity, many students turn to the comforts of food to stave off homesickness and anxiety. There is even a name for the subsequent weight gain that plagues the first year of university study: the freshman 15.

But amid the first year trials and tribulations of academic life is the growing epidemic of eating disorders and the startling realization that ethnicity plays an increasingly large part in students’ eating habits and perceptions of their bodies. According to the National Eating Disorders Association (NEDA), nearly 20 percent of all students polled admitted having an eating disorder. Of that 20 percent, 36.5 percent were men and 63.5 percent were women, from freshman through graduate and postbaccalaureate. Ethnically, 78.9 percent were Caucasian; 8.2 percent Asian; 7.6 percent African-American; and 7.2 percent Hispanic.

Schools sensitive to the growing needs of their students have begun to deal with the plague of eating disorders (binging, purging, comfort eating) with a sensitive hand. Newsweek reports that universities such as Harvard have gone so far as to remove nutritional information cards from eating areas in an attempt to quell disordered eating among students. But what do students think?

“I think I’d rather be broke than fat,” says Jennifer, who is 18 years old, five-feet, six-inches and describes herself as “athletic.” “I don’t have anything against bigger people, but for me, it would be so frustrating to be like that.”

Jennifer, who is half-Asian and half-Caucasian, says that growing up she was taught to believe that fat equaled laziness and that society would hold her back based on that assumption.

Tiffany is a black freshman who has been accepted into USC. She, too, has no noticeable issues with her weight (She’s five-feet, eight-inches and approximately 130 pounds.), but is less worried about the freshman 15.

This difference in aesthetic sensibilities finds its home in anthropology. Around the world, black communities generally embrace weight with a bit more tolerance. Some tribes in Africa even require female inhabitants to spend time in “fattening huts” to pack on the pounds. Asian communities celebrate weight in sports such as sumo wrestling but exhibit eating habits consistent with slender populations. Women of Hispanic and Latin cultures also tend to embrace their curves. When Jennifer Lopez emerged in Hollywood, her assets quickly made her a superstar, paving the way for other Latinas like America Ferrera and Sofia Vergara to do the same.

The best way to avoid the freshman 15 is by eating healthy and getting regular doses of exercise. Isometrics (isolating and releasing the muscles) can be an easy and effective way to stay toned. Also, attending a school with a carefully thought-out nutritional program can be helpful as well. Students in Southern California for years have enjoyed the perks of their enlightened administrations. There have been a number of healthful choices available to them at UCLA, USC and other area universities.

It is best for students not to fixate on the details of what they consume or the caloric intake of each item that passes their lips, but instead to practice balanced eating for energy and sustenance. Late-night meals can also exacerbate weight gain, therefore, it’s discouraged to eat large entrees after 7 p.m. In the event that extra weight finds its way into a student’s life, fad diets should be ignored and replaced with portion control and exercise. Experts caution afflicted students to accept their bodies, regardless of racial and social considerations, and to adopt a clean lifestyle rather than attempting to fix what is broken if and when the freshman 15 finds its way into their lives.