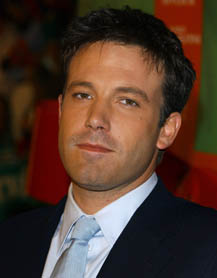 Hollywood to Ben Affleck: Step away from the multiplex.

And stay off the magazine rack, too.

If he can’t survive Surviving Christmas, the latest in a series of critically ravaged turkeys on his downwardly mobile resume, what’s left for the one-time golden boy?

Turning his in-our-face relationship with Jennifer Lopez into a soap opera? Wait a minute. They did that. And it, too, is so over.

"There have been other stars who have had career ups and downs, but with Affleck there’s been an amazing confluence of factors," says industry analyst Paul Dergardabedian.

"He’s had a lot of negative attention paid to his private life, and at the same time he’s had so many bad movies. It’s a double whammy."

Dergarabedian’s advice: Don’t lose that smile. "He obviously doesn’t take himself too seriously, and he still makes a lot of money. But the question is, will audiences spend their money to see him? That’s what it’s all about."

They certainly didn’t for Jersey Girl, which opened in March to $8 million at the box office and didn’t come close to a profit. Nor for the universally reviled Gigli – his co-starring effort with Lopez – which opened in August 2003 and made just over $6 million, total.

Before that was the limp sci-fi thriller Paycheck (a $13 million opening), the superhero actioner Daredevil (a strong box office, but no one is clamoring for a sequel), the big-budget Tom Clancy thriller Sum of All Fears (a weak return for what was supposed to be a summer blockbuster) and the minor drama Changing Lanes.

That came after the critical disaster Pearl Harbor and the better-forgotten Bounce, Reindeer Games and Forces of Nature.

"People have trouble separating the Affleck character who they read about in tabloids and the guy who makes these movies," says Harry Knowles, founder of the Aintitcoolnews movie Web site.

"You can’t criticize him for falling in love with Lopez, but the ‘Can’t you kiss in private?’ feeling made people want to not like him. So now it all comes down to choosing solid good work."

But that seems to be Affleck’s biggest weak spot. After he and Boston buddy Matt Damon won the Best Screenplay Oscar for 1997’s Good Will Hunting, Damon made critical and commercial hits like Saving Private Ryan, The Talented Mr. Ripley, Ocean’s 11 and the two Jason Bourne films. This winter, he’s in Ocean’s 12.

Affleck, by contrast, has a cameo as Daredevil in next year’s Elektra (starring his current girlfriend, Jennifer Garner), but recently backed out of the basketball drama Glory Road, which Josh Lucas is now heading up.

"Affleck should stick to action movies like Pearl Harbor and Armageddon and stay away from comedies, where he has less appeal," says industry analyst Gitesh Pandya of boxofficeguru.com.

"The name Ben Affleck is becoming one that people might want to stay away from. He’s not Pauly Shore yet, but he should follow Matt Damon’s model and do action films."

And one hit can change everything.

"One movie can put him on top, but the truth is, this guy has zero audience," says celebrity biographer Douglas Brode.

"He’s not quite box-office poison, but he’s also not the opposite – he can’t get people into the theater. No one is going to see a movie because of him."

Affleck has to lie low for a while, Knowles says, and take a page from another star’s handbook.

"When Bruce Willis was overexposed in the early ’90s, came off several bombs including Hudson Hawk, and he and Demi Moore were very public, Willis knew he had to make a good movie, and something different from what people were expecting – and that was Pulp Fiction.

"This is the point when Ben needs to sit back and say, ‘I’m not going to make a movie until I find a script that’s perfect for me.’ He needs to hang back from the public eye and give everyone a break, so that when they see an advertisement for a Ben Affleck movie, they’ll say, ‘Oh, I haven’t seen him in a while,’ rather than avoid it."

A FLOP AT GOOD-SCRIPT HUNTING

Since Ben Affleck’s first movie role, in School Ties (1992), his approach to film selection seems to resemble that of an unprepared student taking the SATs: random guessing – then just giving up.

Hit: Chasing Amy (1997) His buddy Kevin Smith wrote and directed this romantic comedy about an illustrator (Affleck) in love with a lesbian (Joey Lauren Adams).

Hit: Good Will Hunting (1997) The script – rumored to have benefited from the heavy editing hand of patron saint Miramax – nonetheless provided the winning image of Affleck and Matt Damon at the Oscars.

Hit: Armageddon (1998) He looked silly in a spacesuit, but Affleck helped draw the ladies into this blockbuster destructo-rama.

Hit: Shakespeare in Love (1998) His droll turn as the pompous star of Will’s plays gave this Best-Picture winner a touch of modern sass.

Miss: Forces of Nature (1999) This improbable romance with Sandra Bullock – they meet on a troubled plane trip – wouldn’t even qualify for good in-flight viewing.

Miss: The Project Greenlight movies. Watching the making of Stolen Summer (2002) and The Battle of Shaker Heights (2003) on HBO was great. The movies, which Affleck co-produced, were not.

Miss: Jersey Girl (2004) Even with J.Lo getting killed off early, Affleck could gather no sympathy as a sudden single dad.

Hit: California State Poker Championship. (June 20, 2004) Affleck beats "Spider-Man" Tobey Maguire, among others, winning more than $350,000 at the No Limit Hold-Em event in this three-day tournament.