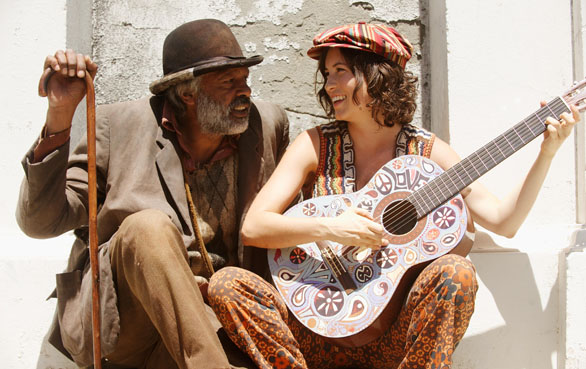 I made a not-so shocking revelation while watching the Australian musical movie Bran Nue Dae: I am definitely 100 percent American. The film, which follows a 16-year-old aboriginal boy Willie (Rocky McKenzie) as he runs away from Catholic school to get back to the girl he loves back home, is packed with Australian sensibility and, as I discovered, Australian pop stars. You know you’re not familiar with a country’s pop culture when you think the protagonist’s love rival is not very good looking. He must be a pop star! (And he is – Dan Sultan, who plays Lester, had the No. 1 independent album last year in Australia.) Willie’s love interest Rosie, played by Jessica Mauboy, sings like a contestant in the early seasons of “American Idol” – no wonder, since Mauboy was a runner-up on “Australian Idol.”

The story starts out in Willie’s hometown of Broome. He has a romance brewing with Rosie, while his devout mother is pressuring him to go to school to become a priest. He does as his mother wishes, but he spends his days at school dreaming about the girl back home. This part of the film feels rushed, which is a shame because Geoffrey Rush, as Father Benedictus, is a delight. But the filmmakers are hurrying to get to the real focus of the film: Willie’s literal and spiritual journey home.

As anyone who’s ever seen a Baz Luhrmann film knows, Australian films can be very vibrantly colored, especially when the majority of the film is spent on the orange dirt roads of the Australian outback, as is Bran Nue Dae. The musical is also just plain goofy. Every supporting character is a complete hambone. The musical numbers, when in the classical Broadway vein, come off as silly. When the schoolboys burst out into “Nothing I Would Rather Be,” it’s all awkward elbows and knees; it’s approximately at the level of a high school production.

The film really hits its stride after Willie runs away from school. The scenes and musical numbers are not as rushed, and they have a pop-rock flavor that suits the story and the performers much better. We are also introduced to Willie’s “Uncle” Tadpole (Ernie Dingo), a homeless man who becomes Willie’s spiritual guide and the standout character of the film. Throughout the film, Willie struggles with the idea of sin, especially when he lusts after Rosie. Unfortunately, McKenzie’s face really only comes alive in these moments; he spends the rest of the film looking confused and shy. He would have been a more interesting character if we could see that struggle on his face more.

The film is cute and fun, but not very deep, at least in its climatic revelation scene, where basically all the characters discover they’re related somehow. In the end, Willie states the film’s message: “Home is heaven.”