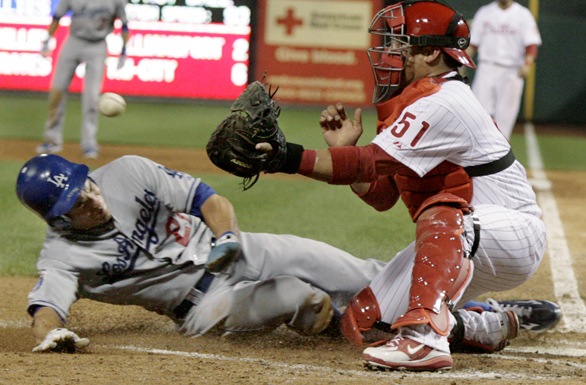 Barring a miracle of biblical proportions, the Dodgers’ chances of reaching the playoffs are finished. It’s like Spring Training all over again to watch manager Joe Torre trot out guys with names you’ve never heard before. Russ Mitchell ring a bell? John Lindsey? Jon Link? How about Trent Oeltjen? Just when fans were getting used to last month’s new bizarre appellations like Podsednik, Theriot and Barajas, a host of new names and faces come along sporting Dodger caps. It makes a fan wonder just what this current team is all about: making a late-season run for the playoffs or checking out prospects for next season? What is certain is that the current cast of characters is a far cry from the group of players who began the season, and that the latest arrivals are not what you might call A-listers. The new look is decidedly blue collar for MLB standards.

“Wait’ll next year!” was the famed cry of the old Brooklyn fan watching yet another pitiful season come to an end. Today’s fans are no strangers to disappointment. At least now they can get a preview of next season’s possible roster.

The McCourt divorce trial has opened the books on an ownership that is anything but flush. Their debt exceeds the entire annual income of the club. One can expect there won’t be any Manny Ramirez-style $20 million contracts this off-season. While many fans blame the team’s failings on a declining payroll and are pessimistic about the future, I prefer to take the more hopeful view. If payroll goes down and the team continues to struggle, the ticket prices might fall enough so that a working stiff can actually take a date or, dare-I-say, his family to the stadium and get decent seats without breaking the bank. Who knows, the team might actually win. Could anyone have predicted that low-payroll teams like the Padres or the Reds would be leading in their respective divisions at the start of this season? This might be the start of a new trend: major league baseball of, by and for the people. Lower payrolls, cheaper tickets and teams who play with working-class heart.