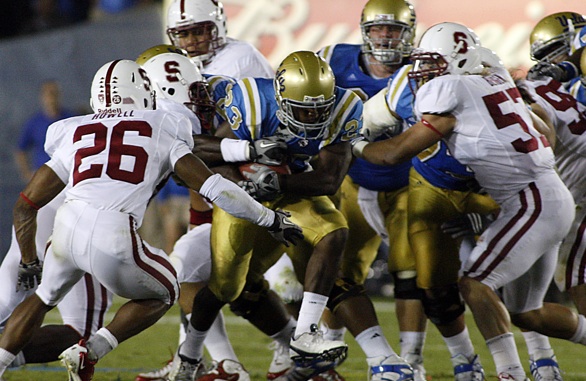 A week after challenging Kansas State on the road for the entire contest, the UCLA Bruins could not find the means to score in a 35-0 shutout loss to the visiting Stanford Cardinal at the Rose Bowl in Pasadena.

“Tonight was an offensive disaster. There is no other way to say it,” Bruin head coach Rick Neuheisel states. “We’ve got to look ourselves in the mirror and fix it.”

Arguably the best squad in the Pac-10 with one of the best quarterbacks in the nation (Andrew Luck), the No. 25 Cardinal (2-0, 1-0) came in with no mercy in both team’s conference opener. By the 9:31 mark of the first quarter, Luck had thrown a touchdown pass to Ryan Whalen; at 1:33, the Cardinal led 10-0.

Defensively, the Bruins (0-2, 0-1) simply could not contain the Cardinal, who led 13-0 at halftime after a second Nate Whitaker field goal.

“Defensively we played valiantly until we unfortunately ran out of steam,” Neuheisel says. “We can’t leave the defense on the field as much as we have the first two weeks.”

Stanford pounded two additional scores in the third quarter before finishing off the scoring in the fourth on Luck’s three-yard pass to Coby Fleener. The Cardinal defense looked strong through four quarters of defensive efforts.

“We just talked a lot about packing the defense for a road game,” Stanford head coach Jim Harbaugh affirms. “It’s something we needed to play better on the road, and we certainly packed the defense this week.”

For the game, UCLA’s Johnathan Franklin shined the most in 11 rushes for 73 yards. Both quarterbacks who received playing time (Kevin Prince and Richard Brehaut) looked below par.

The Bruins remain at home for their next affair, Sept. 18, entertaining Houston at 7:30 p.m.

A win is a win, and this became one of the themes for the 2-0 USC Trojans after a 17-14 victory over the visiting Virginia Cavaliers in a home opener at the Los Angeles Coliseum. After a scoreless first quarter, USC finally found the end zone in the second as sophomore quarterback Matt Barkley threw for two touchdowns. Passing for 202 yards, Barkley led the offense to big plays on several occasions, but some plays were erased after penalties. For example, Ronald Johnson’s 47-yard touchdown reception had the entire stadium cheering, but a holding penalty nullified the impressive score.

Despite the home-opening win for head coach Lane Kiffin’s debut in Los Angeles, he believes the team is not content.

“[That’s] probably the most miserable 2-0 locker room I’ve ever been in, which is good,” he remarks. “Our players understand we have to play much better … we’re extremely disappointed with our performance.”

The difference between this game and their opener at Hawaii was on the defensive side. USC’s defense allowed only 14 points and quietly controlled the tempo of Virginia’s offense the entire game. The Trojan defense seemed to have made the necessary modifications to gain positive acknowledgements for this 2010 campaign.

“Our defense was more itself. We got to really go out there and show what we’re about,” sophomore linebacker Devon Kennard says. “We bounced back. We held strong.” USC safety T.J. McDonald held a game-high 12 tackles.

“I don’t think it was ever that we needed to reestablish anything,” he says. “It was more of tuning up the little things that we need to fix, and I feel like we did that.”

Penalties plagued the Trojans, and Barkley suggested letting go of the troubles. “I was just saying, ‘Move on, move on,’” he states as having said in the huddles. “’Move on to the next play. Forget about it and not let it happen again.’”

No. 18 USC continues its non-conference schedule, as they travel to Minnesota Saturday, Sept. 18. The Golden Gophers belong to the Big-10 and are currently 1-1. Game time is 12:30 p.m.

Football
NFC preview: How the Eagles stack up against the rest of the conference
772 views

Football
Austin Proehl, hopes to join his father with a Super Bowl ring, helps out by playing role of Edelman
1,650 views

Football
Rested Rams and recovered Aqib Talib know what it takes down the stretch
2,273 views