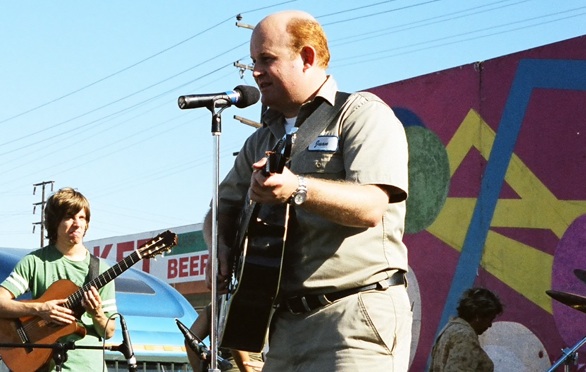 Satire, when done well, can be one hell of a way to experience comedy. In El Súperstar: The Unlikely Rise of Juan Francés, moviegoers are treated to satire by some of the greatest names in comedy. Hollywood royalty Norman Lear (who brought the world “The Jeffersons” and “All in the Family”) as well as comedian George Lopez (“Lopez Tonight”) combine their Midas touches in hopes of recreating their respective industry success.

Juan Francés (Spencer John French) was born Jonathan French to a pair of Caucasian missionaries. After the untimely death of his birth parents, his family’s housekeeper (Lupe Ontiveros) takes him into her heart and home. She raises him like a son. Juan grows up, fully immersed in Latin culture, and discovers at the tender age of 10 that he has the gift of song. From that moment on, he writes a number of ditties that chronicle the plight of the Mexican in Los Angeles. Juan’s newfound family rallies around his talent and gives him the strength to pursue it on the national level (or in his case, in Echo Park for public access television).

Juan’s rise to fame comes when he meets and falls in love with a JLo wannabe singer-actress named Angelica (María Esquivel) who guides him from his modest day-laborer existence into a superstar life as the next Pitbull. Will Juan be able to hold onto his humble beginnings or is he forever lost in his massive celebrity?

Despite its spectacular pedigree, El Súperstar gets a slow start finding its humorous voice. Early on, it feels as though director Amy French is scared to push the envelope. With satire, you either have to go full throttle or be steeped in so much irony that the jokes tell themselves. This does not happen in El Súperstar until the middle of the movie when Angelica is introduced. The gaudy and outrageous Puerto Rican tart is such a successful catalyst she nearly walks away with the movie. Fortunately, before this can happen, the script kicks into high gear, the other actors step up their games and the director leads everyone back into greatness.