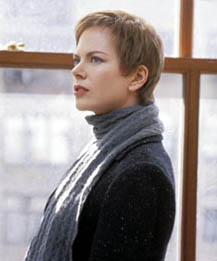 In Birth, you’re asked to consider the possibility of reincarnation.

But if you believe you have only one life, you’ll want to steer clear: A single life is way too short to spend any of it at this slack, aimless film.

Nicole Kidman is Anna, an affluent New Yorker in her mid-30s whose husband, Sean, died unexpectedly about a decade earlier. So Anna is understandably surprised when a 10-year-old boy, also named Sean, shows up at her door, claiming to be the reincarnated spirit of the dead man.

Possibly, this idea would have worked as comedy. Say, if the kid had said something like, "I am dead people."

But played straight, Birth is ponderous and creepy – and not the good kind of creepy, either.

Although Anna is initially skeptical of the boy’s claims, she soon starts to see things his way. Which results in such discomfiting scenes as Anna kissing young Sean on the mouth and taking a bath with him.

Presumably, director/co-writer Jonathan Glazer (the superb Sexy Beast) intends for these scenes to make us uncomfortable. We’re probably meant to take them as evidence of either the depth of Anna’s love for her husband or the depth of her delusions.

But it’s hard to keep that in mind while you’re looking at Anna and Sean gently sucking face or sitting together in a bathtub, apparently nude.

Yes, it’s all handled very "artistically," but these scenes still throw you out of the movie. Still, at least they’re involving on some level – which is more than can be said for most of Birth.

In addition to claiming to be Anna’s husband, Sean keeps warning her not to go through with her impending marriage. Anna is engaged to Joseph, a rather formal and, we discover, tightly wound gentleman who relentlessly pursued her for years before finally persuading her to say yes.

You can’t tell if Sean is against the marriage because he believes he’s still married to Anna or because he knows something disturbing about Joseph.

Time will tell, you figure – but you’re wrong. This film has more loose ends than a dollar-store kimono.

One loose end that does get tied up fairly cleverly involves a sullen family friend who holds a secret about a gift-wrapped package.

This friend is played by Anne Heche, whose hair is uncharacteristically long. Meanwhile, Kidman’s is unusually short, suggesting that the women have swapped heads, or at least stylists.

With her hair so short, Kidman, who is actually 37, sometimes looks more like 12. In any case, her appearance is positively Peter Pan-ish.

This, of course, supports the theme. (If you’re going to fall in love with a 10-year-old, you should at least look young.)

Otherwise, though, Kidman’s performance seems confused. Her character’s journey from skeptic to true believer is unconvincing. One moment she has her feet on the ground and the next she’s flying off to Neverland.

As Sean, young Cameron Bright (Godsend) has a big, round head and adult eyes. His performance may be the best thing in Birth.

Heche is too insistently dour, but Danny Huston is convincing as the commanding Joseph. Lauren Bacall, meanwhile, is a shade too arch as Anna’s aristocratic mom.

But if Kidman and some of the others are disappointing, there is always next time.

That’s the great thing about being an actor: You always have a shot at another life.