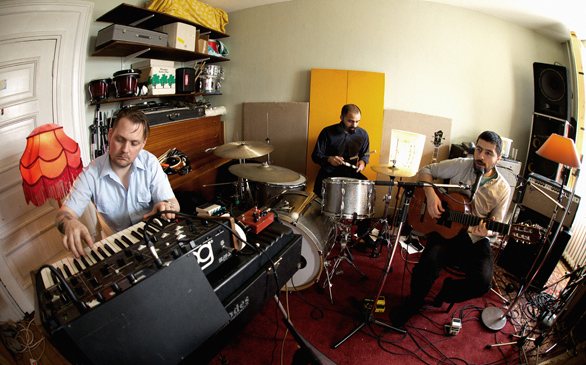 If you recognize Swedish-Argentine folk singer José González, then you pretty much have the gist of what the band Junip is all about. It’s basically González in band form: a much fuller sound arrangement than what we are normally used to with the singer-songwriter. Stemming from Gothenburg, Sweden, Fields is Junip’s first full-length LP since the band began in the late ’90s. It is only now that Fields was able to be completed as González worked on and off with the band as he finished his solo albums. The trio includes Tobias Winterkorn (keyboards) and Elias Araya (drums) with a sound that is partly psychedelic in its mix of organ pipes and rock sound.

“In Every Direction” gives a raw vibe of traveling a desert road, the top down on your Mustang mid-afternoon. Its harmonies rooted in a type of bluesy jazz that fits González’s vocal repertoire. The only problem is that the album never strays from the style of this first track, and everything eventually sounds the same.

Besides the original formula established in the first track, the rest of the album leaves no surprises, and sounds like another José González LP rather than establishing a unique Junip sound. It does try, however, in songs that allow for the other members to shine through, like “It’s Alright,” which has González singing with the others and a louder bass drum and slower pacing. Fields is like a lazy Sunday afternoon novel and, while perfect at first, it eventually gets tiring.