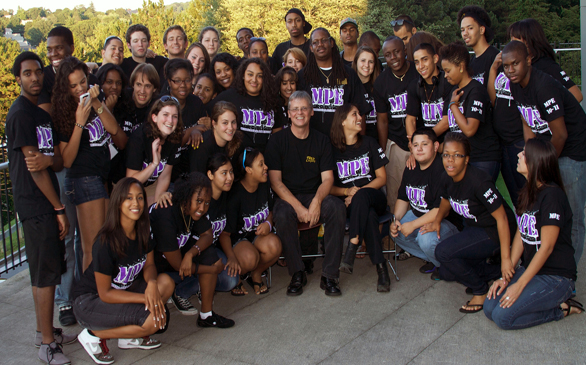 It is a Sunday evening in late August, and at Cal Lutheran University in Thousand Oaks a slew of incoming freshman are anxious to see what’s in store for them on stage. Freshman orientation has been going on all day, and this will be their last event.

The lights dim and a montage of different faces, people and cultures flash on top of a huge screen. When it ends we meet a young woman of color, she looks Latina but no one is sure. This same woman appears on and off stage as different characters throughout the show – as a Mexican migrant boy, a gay minister, an Appalachian woman, the daughter of a mixed-race couple, a Native American, a disabled Korean woman in the Iraq war – each one with a provocative American story to tell.

The show, titled “New Faces of America,” was created by English playwright Colin Cox, founder of Will & Company, a non-profit theater organization based in Los Angeles. “New Faces” is currently touring colleges across the United States with the purpose of showcasing unique American voices and allowing for the discussion of issues not many young people are exposed to.

“Originally, I’ve done a play called ‘Faces of America,’” say Cox. “Will & Company was originally known for doing Shakespeare, but we did a lot of multicultural Shakespeare, and then I was approach by some agents in New York and by some college presidents to see if we would like to create a work that would address the issues of diversity on college campuses. So what I did originally was interview a lot of college-age people and asked them to tell me what their story is as an American.”

Each of the characters portrayed by the actress in this one-person show is based on interviews with real people. The character of the migrant worker was based on an interview Cox did with a man from San Diego; this character goes off to college and finds that his tio back home has been beaten while working in the fields. Cox also creates characters by fusing the stories of different interviews, like the time he went into East Los Angeles to interview 30-40 people to help create a Chicano character for his other plays.

All throughout the country, Cox is continually evolving and reshaping the “Faces of America” productions. After each show he asks the audience for suggestions of new characters and stories.

“I get, ‘Well what about an adopted white kid with black parents?’ and I get asked about these types of characters, and can I create them? So then I go and research them and interview people in that situation, and with their permission I create that character.”

Currently, for his next installment, Cox is working on creating a transgendered character. Trained originally as a biochemist, he has already started reading volumes of literature and doing a massive amount of research on the topic. Even with this training, some of the hardest characters he has had to capture were Native Americans.

“To me, the most abused element in the history of this country is toward the Native American. Native Americans don’t trust us, and rightfully so. It’s like, ‘Why should I bother to tell you my story. You have done nothing but screw us over for 300 years. And they’re right.”

Though many of his shows include standing ovations and general praise from the audience, there is one element that has given Cox hate mail and even death threats.

“The one I think is the hardest right now for audiences is the gay minister. I’m often asked if I find anything that is all-American? Since I’ve done all 50 states now, I’ll tell them it’s homophobia. America is an incredibly, incredibly homophobic country; gay issues are hard,” Cox says. “The reactions range all across the board. I’m not offering answers. I’m offering viewpoints and I want the discussion to take place. Can you be gay and a Christian? After that is that Native Americans have the highest suicide rate in the world. It’s shocking in that [the audiences] have no idea.”

The show has built an incredible reputation throughout its national tour. Playing the United Nations Association twice, it has been honored by the NEH, NEA, the NAACP and GLAAD.

At Cal Lutheran University, the show ends with 22-year-old actress Natalya Oliver (It’s her second time doing “New Faces of America.”) doing a post-show discussion. Audience members ask her questions regarding the meaning of some of the characters and particularly what ethnicity she is.

Though relenting to being half Chicana, she ultimately cites, “I am an American.”