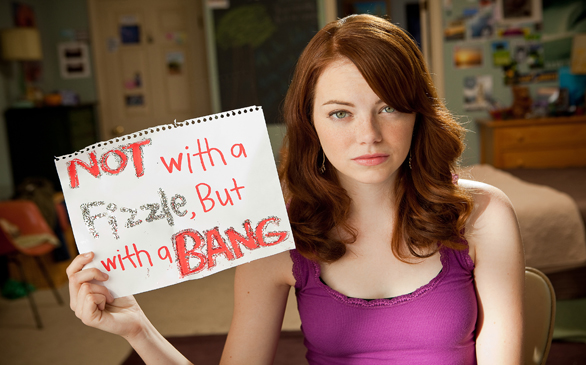 That which was old is new again.

Since the mid-1990s, the cinematic trend of updating classic literature into frothy teen romps has, with varying levels of success, launched such camp classics as Clueless (inspired by Jane Austen’s 1815 novel Emma), Cruel Intentions (Dangerous Liaisons by Pierre Choderlos de Laclos), Ten Things I Hate About You (Shakespeare’s “The Taming of the Shrew”) and She’s the Man (“Twelfth Night”).

With the much buzzed-about release of Easy A – a remastering of Nathaniel Hawthorne’s 19th century tale of adultery and pious prudence, The Scarlet Letter – audiences are treated to the best offering from the genre since Amy Heckerling and Alicia Silverstone went rollin’ with the homies in 1995.

Newly minted “It Girl” (and Lindsay Lohan thunder-stealer) Emma Stone stars as Olive Penderghast, a high schooler who takes a page from her assigned reading material and uses Hawthorne’s lessons to grease the school’s rumor mill, upping her social and financial standing. Under the sure-handed direction of Will Glick (Fired Up!), Stone is a captivating and capable ringmaster who took great pleasure in sinking her teeth into Bert V. Royal’s bitingly witty script.

“Bert is so fantastic,” Stone gushes in her trademark rasp as she smoothes the layers of her dusty blue floral-printed McQ dress and takes a sip from a freshly filled cup of coffee. “Olive and her perspectives were so fleshed out on the page that my only challenge was trying to do that justice. I loved how clever and witty Bert was about issues that are really important.”

She explains that one of the things that magnetically drew her to the role was the way the script never pandered to the audience but still addressed meaningful topics that anyone could relate to.

“[They] just happen to be [seen] through a high school girl’s eyes,” she says. “The subject of gossip, judging a book by its cover without knowing the full story, extremism, technology and the way information travels, the speed of everything. Like when Olive says something and it goes all the way around [the school] and gets back to her, and it’s been 30 seconds. What’s messed up is that’s actually the way things happen.”

Stone has equally enthusiastic praise for her director. In fact, the mere mention of Gluck’s name incites her to smack the table and proclaim, “Will, I love him! Don’t tell him I ever said that.”

According to both the actress and the director, they share a sibling-like bond that allows for unmitigated ribbing and serious blunt honesty.

“He calls me out on everything!” Stone groans, rolling her eyes in mock annoyance. “He doesn’t let anything slide. If I’m like, ‘Ahh, that sucked,’” she mopingly sighs, “He’s like, ‘That did suck. Go again.’ That’s what I like! People who are honest with you push you to be better.”

For the 21-year-old starlet, Gluck’s brand of candor was exactly what she needed in her first leading role, one that demanded her constant onscreen presence and would succeed or fail entirely on her performance.

“I was a little [anxious] the whole time,” Stone admits, chuckling. “I didn’t know I was such a micro-manager, but I am. I had to be up first and be there last every day. In my spare time, I’d try to sleep, which I wasn’t doing too much of. I think it was less about the size of the role and more about wanting to do the character justice. But that pressure didn’t come from anyone else. It was all self-inflicted.”

That voluntary creative flagellation, mixed with innate, God-given talent and a strong work ethic, created a performance that has everyone in Hollywood sitting up, taking notice and searching for labels to help them define such a remarkable young star. As far as any similarities to Lindsay Lohan (the red hair, the throaty rasp, the high school movie rocketing her into the stratosphere), Stone refuses to comment, instead offering a wry, knowing grin. She is, however, quick to bat away her newfound title as the “Next Big Thing.”

“That’s nice,” Stone shrugs, “but it’s such a fleeting label to put on someone. A week later they say, ‘And this girl is the new It Girl.’ I just hope I get to keep working steadily because it’s been nice to call this my only job. My ultimate goal is to not have to go work somewhere else. I’m so lucky and happy to be here, today. It’s amazing now, and I’m just trying to appreciate it.”

Easy A releases in theaters Sept. 17.