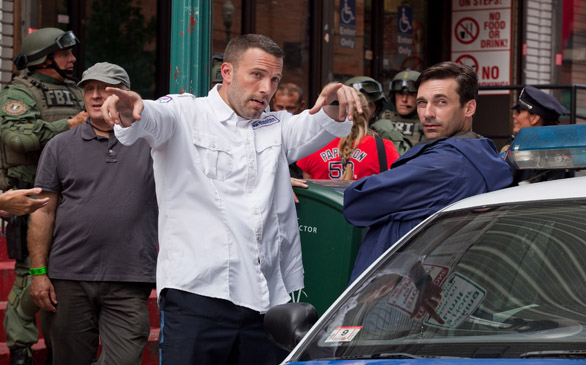 It’s a very pretty-looking cast, especially when they are seated shoulder to shoulder on a platform upon which the thespians can charm the curious critics seated in chairs below. But the stuff that already had us hypnotized was the film (and their performances) we saw the previous night about the underworld life of Boston’s finest robbers and their accomplices.

You may be thinking, how many times has it been done before? And it inevitably has been, and over 100 times at least.

Co-writer, director and star Ben Affleck alludes to this fact and admits, “It’s kind of tricky to change that genre. You retell those things over and over again, so you’re worried the audience will think it’s kind of predictable. But those movies stand as a reminder that even though you’re working in the same genre, you can do something special.”

Surprisingly, he manages to succeed in making a film that is pretty gosh-darn original, though the effort didn’t come without a price.

There are over 300 bank robberies in Boston every year, and the one-square-mile neighborhood in Boston known as Charlestown produces more bank and armored car robbers than anywhere in the United States. Aware and often playing to these statistics, The Town features Affleck as Doug MacRay, a thief with a conscience. Leading his pack of ruthless robbers with childhood friend Jem (Jeremy Renner), MacRay falls for Claire (Rebecca Hall), a woman they took hostage on their last raid.

Hoping to hit the jackpot and have one final moneymaking hurrah, the gang must fend off a persistent FBI agent (Jon Hamm), silence an ex-girlfriend turned liability (Blake Lively) and survive some wicked car chases and gun-toting action sequences.

Affleck magnificently directs an ensemble cast toward performances of their career. Their authenticity is exuded on the screen because they look and sound like Bostonians should (If not real ones then at least like those we’ve seen on screen before).

“Accents are very important because they can ruin a movie,” says Affleck whose own hint of a Boston accent has been beaten down over the years by the Hollywood machine. “You have to hire good actors. With Renner, I put the right people around him and without saying anything, you could see him radiating toward the people that would help him. It’s not just an accent; it’s a worldview, it’s carriage, it’s vocabulary, especially in Boston.”

“Ben didn’t help me at all!” retorts Renner, originally from Modesto, Calif. “I would call him and ask, ‘So when are we going to get that acting coach,’ and he’d say, ‘We’re not. But I got this little tape for you of criminals talking!’”

“Gossip Girl” star Lively found the accent easy (as Affleck says, “When she auditioned, I asked her what part of Boston she was from.”). However, the blonde bombshell who was forced to slum it down for the role found comfort and assurance in her co-star/director.

“He’s so hardworking and militant about getting the character down, getting the accent down and really understanding the people,” gushes Lively while Affleck blushes two seats over. “When we were on set, it was such a comfortable world that we were able to step into and lose ourselves. I never felt like he was directing me or judging me. Rather, we were creating this thing together.”

When allegations about being a socialist filmmaker based on the subject matter he has chosen for this film as well as his directorial debut film Gone Baby Gone arise from journalists in the audience, Affleck is quick to respond and explain: “I don’t think you necessarily have to have a certain ideology behind films that you make. I’m an observationalist filmmaker. I try to make some keen observations. Social differences are the fabric of our lives. They are an aspect to people’s coexistence that is often studied and from which many conclusions are often drawn.”

The Town releases in theaters Sept. 17.