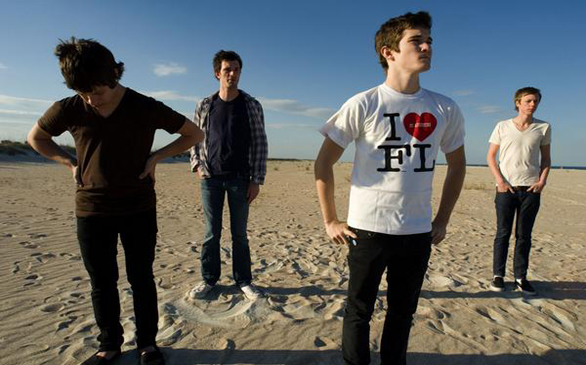 If you went to this year’s Vans Warped Tour, there were admittedly a few things to be bummed out over. Not to name names, but there were a few “question whether or not to continue living” level disappointments.

True to their namesake, however, if ever there were a band that could make things seem not so bad after all, it would indeed be the Florida-bred punk dudes of Fake Problems. One of the few shining beacons of punk rock hope to emerge from this year’s Warped circuit, the band took to Spaceland to show off tracks from their upcoming album, Real Ghosts Caught on Tape, and they weren’t about to disappoint now.

From the album’s Motown-esque lead single, “Soulless,” to the darker, more subdued “Songs for Teenagers,” frontman Chris Farren wailed and crooned but didn’t hesitate to bring his signature sandpaper-and-gravel yells for older favorites like “Diamond Rings,” either. Despite the subtle nuances of Farren’s vocals and the intricacy of guitarist Casey Lee’s chord work, each of the band’s songs, both old and new, all but beg to be sung along to in a live setting.

Farren was all smiles for the entirety of his band’s set, a small gesture that went a long way to prove their live energy is just as infectious as their songs are catchy. But really, with a new album that sounds as good as it does while still in the test run stages, Farren’s got good reason to smile.