Primus: Is it luck? 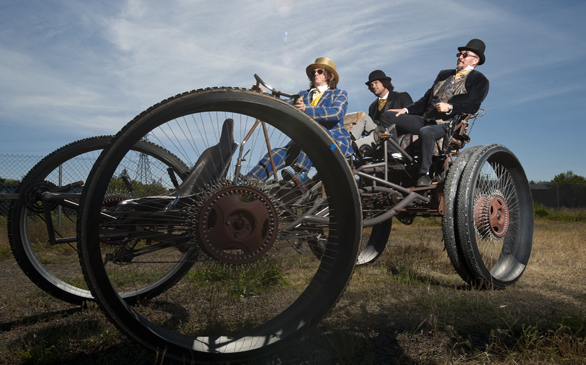 Here they come. The epic ’90s funk metal band who redefined music for Generation X is back. Primus’ last studio album was 1999’s Antipop and since then they have only toured twice: 2003-04’s Tour de Fromage/Hallucino-Genetics Tour and 2006’s Beat a Dead Horse Tour. Many thought the book was written and done on Primus. Is it luck that they’re back?

The personnel, like in many other phases of Primus, are different this time around. Tim “Herb” Alexander isn’t in the fold (again). Original drummer Jay Lane is. As frontman and bassist, Les Claypool explains that Lane’s addition is the reason Primus is alive and well today and for many tomorrows extending well into 2011.

“[Lane] and Stewart Copeland are my favorite drummers on the planet to play with, and I’ve played with a lot of pretty amazing drummers over the years, so it was very exciting when [Lane] was available to do it,” Claypool shares. “It’s really breathed a whole new life into Primus. So, now we’re looking forward with Primus as opposed to just looking at it as a retrospective thing.”

The hints were there in 2006 when the tour was named Beat a Dead Horse. Claypool never knew when Primus would end, but he knew how it would: when it stopped being fun. And it did.

“‘Fun’ is such a big, broad stroke of a word. It’s a big paint roller of a brush. Fun to me means enjoying yourself on a personal level, but also stimulating that creative itch that, Lord knows, I tend to jump all over the place with my creative itches,” Claypool admits. “This is something that has me focused. Being focused on Primus is just something I really wasn’t expecting and hadn’t even thought of in quite a long time.”

He sought out joy by jamming with many notable artists like Buckethead, Stewart Copeland (the Police), Tom Waits and Alex Lifeson (Rush). He’s released more albums on his own than he has with Primus. His attention is divided in so many ways that, much like Primus’ music, it can’t be confined to a single label or category. His endeavors, whether musical or literary, defy a typecast.

“I tend to be a bit scattered,” says Claypool. “I’m all over the place. Sometimes I have to remind myself that when all is said and done, I’m a bass player and that’s what I do best. I’m a restless artist. It seems like I continually have different itches I want to scratch. Whether it’s writing a screenplay or writing short stories or making films to now making wine.”

The strange narrative Primus has weaved into their colorful history doesn’t end with the band. It also includes their curious and talented fan base. Whamola, the peculiar instrument Claypool busts out at shows, contains one of those strange stories. The instrument was custom built for him by a couple of anonymous guys in Burlington, Vt., (who to this day have never taken credit for it) and given to Claypool’s friend and road manager, Trouz Cuevas.

“I took it in the back lounge, and I was like, ‘What the hell?’ I just started hitting on it with a stick. The next thing you know, I started calling it the Whamola and wrote the song ‘Whamola,’ and it’s become one of my favorite things to bang on,” Claypool says.

Another strange and fun tale is how Claypool got one of his Rickenbacker basses from Lifeson.

“I don’t think he meant to give it to me, but we got blitzed, probably the drunkest I’ve ever been in my life, at his house one night. I ended up leaving there with one of his basses and an auto show trophy, which stands about six-feet tall,” Claypool says with a laugh.

Expect more wackiness from Primus as their Oddity Faire tour rolls into Club Nokia. The band announced they are playing Frizzle Fry in its entirety for the Sept. 16 show, but if you can’t make that show, they are playing the same venue again the next night. Expect different setlists, Whamola and the self-deprecating, yet endearing “Primus Sucks” chants we all know and love.