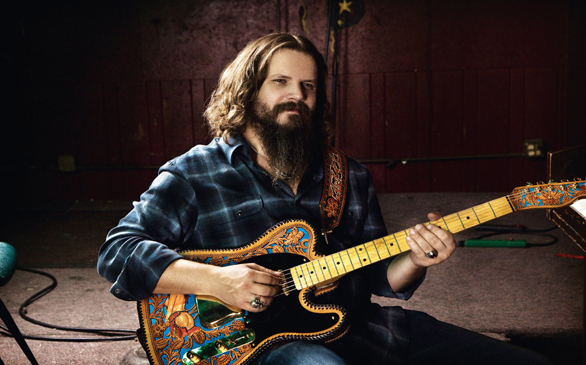 “The original idea was always to do a double album,” says Johnson. “It is an album that is a tale. The first part is a very dark and sordid story. Then everything after that is progressively more positive, reassuring and redemptive.”

The Guitar Song is also available on black-and-white vinyl in a limited edition triple-album package that includes a deluxe lyric book. “Playing the Part,” the album’s first single, is available now too from digital retailers.

Chances are when you hear the term West Bank you think about the Middle East and the Palestinian territory that abuts the western shore of the Jordan River. But the West Bank that Los Angeles-based singer-songwriter Darryl Holter is referring to in the title of his new album is a little closer.

Named for a Minneapolis neighborhood on the west side of the Mississippi River, the West Bank refers to a fabled folk and roots scene in the 1960s with such claims to fame as being the place where Bob Dylan got his start and the place where Bonnie Raitt recorded her first album. West Bank Gone paints a vivid picture of what the scene was like back then, especially during the title cut where Holter chronicles the foibles of some of the denizens of the scene.

And who knows, if you show up for Holter’s Hotel Café gig on Sept. 26 you just might be one of the characters he writes about in the future. West Bank Gone drops Sept. 21.

So that there’ll be more room for added activities, the West Beach Music & Arts Festival is being held this year not at Santa Barbara’s West Beach but a few blocks away at the city’s Chase Palm Park. A new attraction this year is the CuervoGames; an “American Gladiators”-style athletic competition where four-person teams go head-to-head in the Barrel Roll, Mayan Pyramid and Waterfall Climb challenges. Since a tequila maker is sponsoring the CuervoGames there is also a Margarita Madness contest described as “a messy race against the clock to make the ultimate cocktail.”

Among the dozens of musical performers scheduled to appear this year are UB40, Rebelution, Pretty Lights, the Beautiful Girls, JJ Grey & Mofro, Katchafire and the Easy Star All-Stars, who’ll be performing Dub Side of the Moon, their reggae version of Pink Floyd’s Dark Side of the Moon. The Easy Star All-Stars are one of several groups playing at the festival’s official after parties at Soho Restaurant & Music Club. It all happens on the weekend of Sept. 24 and 25.

P.O.D. to Perform at Benefit Concert

Alien Ant Farm and P.O.D. perform at the Never Again benefit show in Moreno Valley this weekend. Proceeds from the show go to the family of 17-year-old murder victim Norma Lopez who went missing in July and was later found dead. The murder hit close to home for members of Alien Ant Farm who are from nearby Riverside and who know lots of people who went to Valley View High School, the same school that Norma was walking home from when she went missing.

Also performing at Never Again are Butterscotch, Adam Lasher Band, Paloma, Cruz, the Ringleader DJ Ace and others. Entry is a $10 donation and a limited number of tickets will be available on show day at the venue, Moreno Valley College.

San Diego-based reptilian rockers Crocodiles released their new album, Sleep Forever, this week, but they had a few songs left over that wouldn’t fit on the effort. The duo is generously giving away the additional songs, all instrumentals, via an EP, Fires of Comparison. Grab your free copy, complete with a little ditty called “Kill Joe Arpaio,” while you can at FatPossum.com.

Those who were lucky enough to have attended Linkin Park’s newest CD release party Sept. 7 were treated to a sneak peek at their newest album, A Thousand Suns, plus an amazing kaleidoscopic light show! A step away from their traditional sound, their newest album is produced in a style they say is closer to their hearts. A little more electronic, a lot more beats, always amazing. A Thousand Suns is currently available. —Melissa Evalle