Cries and Whispers: The The Psychological Cinema of Ingmar Bergman: Now-Sept. 18 @ LACMA 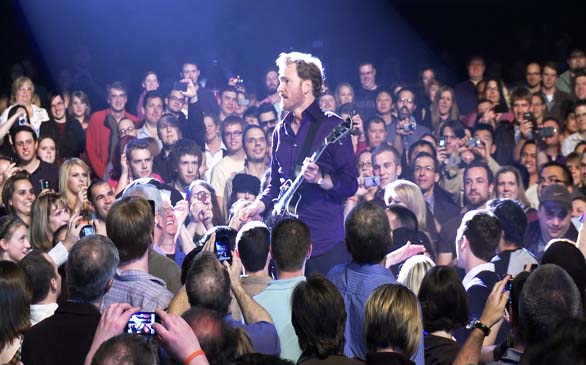 Bibi Andersson in The Seventh Seal

“Auteur” was the term first used in 1950s film theory and derived from the French word for “author,” relating to the characteristics of one director’s creative sight that is channeled through a majority of his work. The theorists who developed this idea argued that film should reflect the filmmaker’s personal vision. “Absolute auteurs” of their time included Alfred Hitchcock and Jean Renoir. The quantity of films in their portfolio was not part of the criteria; the distinctive voice and imagery, the linking camera techniques and visual storytelling that the filmmaker uses was what defined an auteur.

However, the idea of auteurship is not as easy as fitting a square quality in a square requirement. Steven Spielberg is unarguably a prolific director whose influence on the industry is undeniable, but it is questionable as to whether his work would qualify him as an auteur. The same could also be said of his colleagues George Lucas and Francis Ford Coppola. On the other hand, Tim Burton, who has yet to win the coveted Oscar that, for so many, marks the highest level of success, is an identifiable director whose films are characterized by dark subject matter, oddball characters, humorous though sometimes gruesome scenes and a particular eye for color.

Ingmar Bergman is another filmmaker who makes movies that are particular to his style and subject matter. Not to be confused with Casablanca star Ingrid Bergman, Ingmar was also born and raised in Sweden. Though he amassed critical acclaim, his films rarely attracted wide audiences, perhaps because they were in Swedish and American audiences disliked subtitles at this time (and still do to this day, if you ask me).

Bergman directed over 60 films and documentaries in the six decades he was actively working and until his retirement in 2003. Although he passed away in 2007, Bergman is still an influential figure in the argument in support of the film auteur. Many of his works were dedicated to the study of relationships, betrayal and insanity. There is very little action in his films; instead, Bergman preferred to explore human emotions and mentality, especially as to how a person relates to death and the ultimate bleakness of the human condition. He is the master of simultaneously portraying despair and hope.

In his own words, Bergman once said about his job as a filmmaker, “I want very much to tell, to talk about, the wholeness inside every human being. It’s a strange thing that every human being has a sort of dignity or wholeness in him, and out of that develops relationships to other human beings, tensions, misunderstandings, tenderness, coming in contact, touching and being touched, the cutting off of a contact and what happens then.”

If you have never experienced an Ingmar Bergman film, here’s your chance to catch some of his best work on the big screen. Cries and Whispers: The Psychological Cinema of Ingmar Bergman is screening his films all this month, and on Thursday, Sept. 16, the lovely people at LACMA introduce The Touch (1971), a drama situated in Sweden revolving around a housewife who engages in an affair with the town’s newcomer, an impetuous Jewish-American archaeologist.

The Seventh Seal (1957) is one of Bergman’s most well-known films. Playing on Friday, Sept. 17, the film is an abstract and rather bizarre journey of a knight’s battle with death. Parodied quite often (You can catch it in a quick homage to Bergman in last year’s (500) Days of Summer.), the scene of the knight playing chess with a personified Death is iconically of the foreign art-house genre. It is also the film that comes closest to finding any sort of meaning to life. The program concludes with The Silence (1963) on Sept. 17 and …but Film is My Mistress (2010) with special guest director Stig Bjorkman and Fanny and Alexander (1982) on Sept. 18.

Most important, all filmmakers have the honor of influencing each other, harboring a sense of camaraderie among people who are working toward the same end. Critics may not consider Spielberg an auteur, but he can still admire others’ work. He has said about Bergman, “I have always admired him, and I wish I could be an equally good filmmaker as he is, but it will never happen. His love for the cinema almost gives me a guilty conscience.”