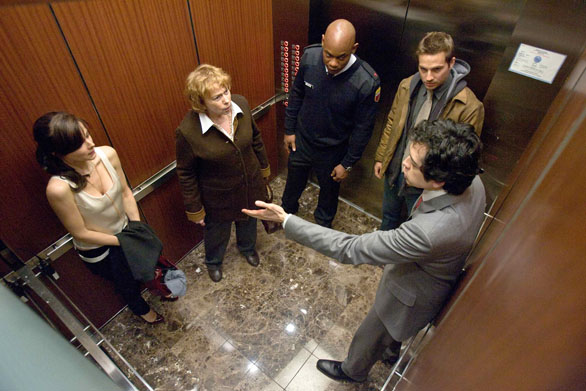 It’s a running joke in Hollywood that the black actor is usually the first to die in any horror movie, but try asking Bokeem Woodbine if he’s the first to be killed in his latest offering, Devil, and he understandably has a bout of amnesia.

“I have to tell you,” he supplies with an impish grin, “I shot the movie last year, and I have had so much on my mind that I can’t remember how it turns out.”

A supernatural thriller directed by John Erick Dowdle (Quarantine), Woodbine plays a security guard who becomes trapped in an elevator with four other people – and as it turns out, one of them is the devil.

“After living in Los Angeles for almost 20 years, and seeing how people are so socially different, I like the fact that you have five people from different walks of life, different genders and different age groups, all being confined in an elevator,” explains Woodbine of his attraction to the role. “Five people who would normally never interact or necessarily even say good morning to each other are forced into this situation, and that drew me to it.”

Despite a successful 18-year acting career starring in hits like Ray, Jason’s Lyric, Dead Presidents and 3000 Miles to Graceland, Woodbine, who sings vocals and plays the guitar for the rock ’n’ roll band 13 Purple Dragons, never had any aspirations to become an actor.

“I am into music and I am a musician by nature, but got the audition for my first movie Strapped because of a wonderful woman named Jaki Brown-Karman, but I had no aspirations to be an actor,” claims the 37-year-old New York native, who cites Forest Whitaker as a mentor. “There are moments that bring me such contentment and joy that I think I can only get from acting, but it’s a very lonely and physically exhausting way to make a living.”

With an impressive list of credits in a variety of films from the Spike Lee-directed Crooklyn to the award-winning television show “The Sopranos,” this exhausting journey rang true for Woodbine while shooting several scenes in Devil.

“Every day we were picking up where the previous scene ended. That was a great thing as that would help you stay in the moment, but it was physically exhausting as your life and the movie starts to overlap. I wasn’t getting a lot of sleep on this film, so I started to feel like it was one long day,” he explains. “We were doing the same scene as the day before, so I never got any separation in my mind in between work and leisure. I think it helped everyone’s performance, but at the same time, it was exhausting. That’s what they pay us for, to be in that moment and in that frame of mind.”

Produced by M. Night Shyamalan, it’s a movie Woodbine hopes will “scare the pants off you. We want you hiding under your sheets,” he says. “We want you terrified – that is our objective.”

And if he’s worried Shyamalan’s involvement might deter fans [His career has been on a bit of a downward spiral for the past few years.), he’s certainly not showing it.

“People get good reviews and people get bad reviews,” says Woodbine. “He [Shyamalan] is a dynamite storyteller and a gifted director. Regardless of what people might say today, you never know what they are going to say tomorrow. You can’t go with the crowd. You have to stand your ground. I think he is a gifted director, and for me, working on this project and him being involved was a definite plus.”