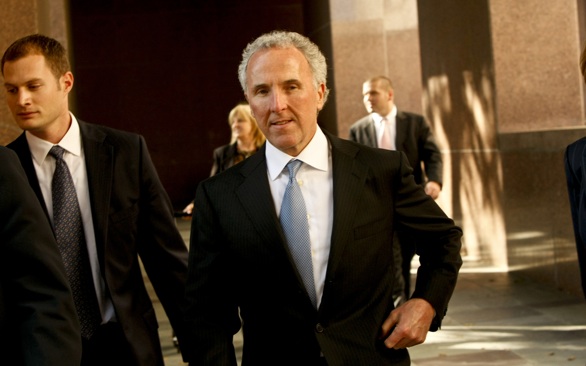 There was a strangely somber mood to the press conference at Dodger Stadium last Friday announcing that Joe Torre is stepping down as manager at the conclusion of the season. His replacement Don Mattingly sat at a table flanked on either side by Torre and general manager Ned Colletti. Standing at a podium next to the table, owner Frank McCourt began the proceedings by thanking Torre for his service and expressing confidence in Mattingly. He spoke directly to Mattingly, “We’re going to win that World Series.”

It was, however, that which went unmentioned at the press conference that was of most interest. The event happened to coincide with a call from former owner Peter O’Malley for McCourt to sell the team. In comments published Thursday in the Los Angeles Times, O’Malley was quoted as saying, “The current ownership [McCourt] has lost all credibility in the city.”

O’Malley, whose family ran the team for nearly 50 years, is only the latest among a group of longtime Dodger supporters to voice their concerns. With the commencement of the McCourt divorce trial last month, revelations about mismanagement of the organization and sketchy personal relations have continued to mount. First, there is the whole charade of “family ownership” which Frank McCourt once foisted on the city. In court recently, Frank testified that he never intended to share the team with his wife Jamie and that her “President and CEO” titles were strictly for appearance. It has also come to light that both the McCourts used the team to leverage over $100 million in credit to support an incredibly expensive lifestyle, including the purchase of multiple mansions around the city. There was also the discovery that an assistant of Frank’s was paid up to $400,000 out of the team’s charity fund. Frank’s own sons received hundreds of thousands of dollars as employees, even though they don’t work for the organization. It was also revealed that the McCourts had avoided paying any taxes for multiple years. With regard to the functioning of the team, it was learned that McCourt approved a plan to raise ticket prices while reducing the team payroll.

And then there is the downright weird, like the revelation that the McCourts paid a psychic healer up to “six figures” for five years to send positive energy to the team via a television set, an episode Frank McCourt continues to decline comment on.

The list of topics McCourt refuses to talk about has grown steadily since the trial began. After Friday’s press conference McCourt briefly took questions from a group of reporters. When asked about O’Malley’s statements, he offered “no comment,” preferring instead to talk about his commitment to winning a World Championship. Pressed on the subject of whether he would consider selling the team, McCourt turned staunchly defiant. With an intensity that was chilling, his eyes narrowed and jaw stiffened: “I’m going to own this team for a long, long time.”

The desire to win a World Series is common among team owners, but with McCourt it has the distinct feel of a crazed obsession. He seems determined to accomplish his aims at the expense of whatever stands in his way. There was a time when this consuming ambition gave him a curious charisma. Despite the deceptions that have cost him so much by way of credibility, there are still those who believe in him. He appears convinced that by winning a championship, he will win back the rest. Yet, what he may fail to grasp is that the old-time Dodger fans don’t just care about winning. They care about the integrity of how the organization is run.

In some ways Frank McCourt resembles Ahab, the captain of the old whaling ship, Pequod, in its hunt for the illusive Moby Dick. Standing alone on the bow of his ship, he remains dreadfully determined even as the signs of impending doom circle around.

Ah, but we know how the story ends. Driven by a megalomaniacal obsession, Ahab casts all human care aside, he abandons both wife and child in his quest to capture the great leviathan. In so doing, Ahab not only destroys himself but takes his ship and crew with him into the abyss.

It is the tale of those who pursue their own single-minded obsession without concern for those around them, a literary representation of the biblical passage, “What benefit a man if he gains the whole world and loses his soul?”

Could it be that the somber tone so strongly felt at Friday’s press conference was the dark foreboding of imminent disaster? Again we hear the voice of Herman Melville’s Moby Dick. This time it is that of first mate Starbuck in his desperate plea to Ahab, “Oh captain, my captain … it is not too late, steady the course and let us away!” We are pleading … Sell the team.