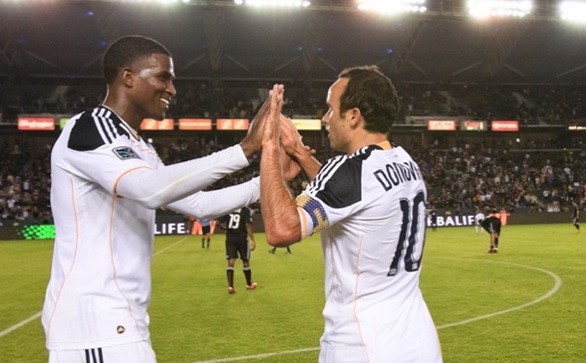 Donovan’s offensive effort landed an equalizer at the 81st minute off a stolen ball from D.C. United’s defense and a through ball into the box that landed on his head en route to the upper right corner of the net five minutes later. Tristan Bowen and Sean Franklin recorded an assist on the captain’s second score of the night.

The nation’s capital squad fired first in the 60th minute when 17-year-old Honduran Andy Najar finished a left-footed shot from a deflection in the box. D.C. United seemed to have three points on the road due to the Galaxy’s inability to play consistently on the offensive end, but Donovan had other plans.

“Before the game this week, I was thinking a lot about wanting to finish at the top of the league, and I want to be MVP again,” Donovan admits. “I wanted to make a statement tonight.”

English midfielder David Beckham saw an increased level of pitch contribution as he entered in the 53rd minute, and it was premeditated, head coach Bruce Arena explains. “I think he did well. Again, we need to appreciate that this is a player who six months ago tore his Achilles’ tendon,” Arena states. “To be back this quickly and to be able to contribute what he has in the last two games, I think it is very impressive.”

The victory was the first come-from-behind win for the Galaxy this season, and Beckham mentions he is proud of that.

“It felt great to be part of that because I know we haven’t done it this season,” he says. “It is important to do that because we can’t expect to win every game easily.”

Los Angeles is now 2-0 on its current three-game homestand before squaring off against the star-filled New York Red Bulls on Friday, Sept. 24, at 8 p.m.

“It will be a good game. I think when the league envisioned this they probably wanted to have something like this. Two big cities, getting after each other a little bit,” Arena says. “The acquisitions of [Thierry] Henry and [Rafael] Márquez, along with [Juan Pablo] Ángel and others, they have the star power for sure. It is a great game for the league.”