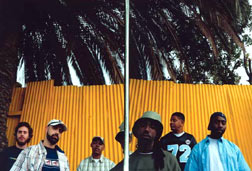 There’s a reason why Los Angeles’ Jurassic 5 gets respect from everyone from mainstream journalists to the underground hip-hop heads who cringe and discredit their favorite group when they become a little too popular–they bust their ass. They’re the guys on the basketball court that everybody loves because they hustle, play defense and rebound to win the game without complaints. Emcees Charlie 2na, Zaakir (Soup), Akil and Marc 7 and DJs Cut Chemist and Nu-Mark just rhyme, produce and DJ without trying to disrespect the culture by acting like something they’re not.

Just ask Charlie 2na. He has no problem admitting he listens to everything hip-hop-related, including radio. "People, the cats who listen to us might bug out if they hear me say I like a lot of Jay-Z shit, I like a lot of Nas, Biggie and Pac and I just bought the Scarface album."

He’s even pleased with the current state of hip-hop because "they looked at this shit like it was gonna fade and fizzle, but not only is it still here but it makes up the biggest percentage of money in the music industry and creativity in the music industry. It makes up the two things that appease both sides of the planet–those cats who are thinking about the cheese and those cats who are in it for the integrity and the heart."

He says he doesn’t believe in labels for different hip-hop acts, be it gangsta rap or backpack because everything rap-related stems from hip-hop music. "These gangstas, they hip-hop. Don’t think they wasn’t listening to (Run) DMC and (LL) Cool J and all them cats."

Which might explain some of the group’s musical choices on their new album Power in Numbers. Jurassic 5 reached out and worked with the notoriously violent yet funny Beatnut Juju on "One of Them", use a Public Enemy vocal sample on the single "What’s Golden" and bring in pop sensation Nelly Furtado on "Thin Line".

"A lot of our fans are gonna be like (shrieks) ‘Ohhh!’ We got Nelly Furtado and all that shit. And it’s not like it’s really like that." Charlie is quick to point out Furtado was part of Canada’s celebrated hip-hop crew Swollen Members since she was four. More importantly, Furtado fits the track like your favorite pair of sneakers. The song talks about male-female relationships from a different angle than the typical radio song.

"We’re like, what if we talked about those women who we want to be with but your friendship is so strong, you don’t want to jeopardize the friendship. So you guys remain friends though you’re both attracted to each other and in a heartbeat, you would take it and make it a lot more. So we sat and conceptualized and wrote the song and we’re like and we’re like this is cool … but it’s one-sided. A woman should be on here rhyming or singing or something."

Luckily, someone who worked for Jurassic 5’s record label spotted Furtado in a grocery store and asked her about Jurassic 5. "And she was like ‘Jurassic 5? Hell yeah, I got both of their CDs.’ She was like, ‘I love those guys.’ She knew our songs word for word and shit."

Before fans can scream sellout, Charlie adds: "If one or two songs sound a little more commercial but don’t take away the integrity of who we are, then I don’t really mind. It sounds like more growth than anything else. The line between commercial and underground is blurring right now and we are some of the groups that are helping blur it."

Besides confusing marketing departments, the group just wanted to match the quality of 2000’s Quality Control, their much-celebrated album with its back-to-basics hip-hop approach and eye-opening creativity. "We didn’t have a real agenda other than to go in and make some great music," Charlie says. "All of the rhymes across the album are definitely pleasing. That’s the shit I love about it, man."