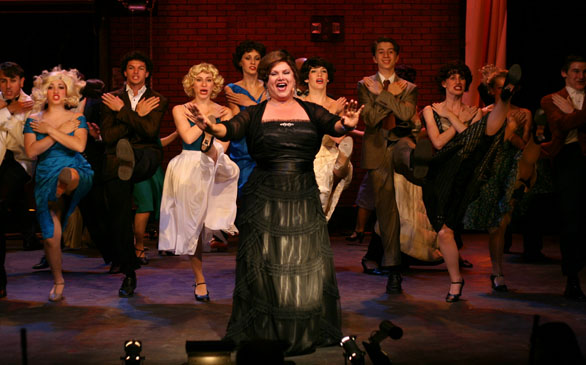 Opening on the anniversary of Fred Ebb’s death, John Kander & Ebb’s (“Chicago,” “Cabaret”) final musical “Curtains” opens with the stereotypical diva leading lady who is obnoxious and disappointingly tone-deaf. After the curtains close on opening night, she mysteriously dies. The failure of a show that was intended to be Broadway bound is now merely homeward bound. The Boston detective, who shares a love for musical theater, orders the entire cast and crew to remain in the theater until the crime is solved. Drama, love triangles and, of course, more murders ensue behind the curtain of this refreshing and thoroughly enjoyable musical comedy.

The leads and ensemble do a terrific job. Topping the show’s list of successes are “The Woman’s Dead” and “I Miss the Music.” As far as individual actors, Renee Travelii (Carmen) completely steals the show. Her comedic timing is priceless.

John LeMay gives a charming and sincere performance as Detective Frank Cioffi. He and Mandy Nissen (Niki) have great chemistry. It is a blast watching them flirt and tease.

Add in Tessa Grady’s (Bambi) superb dancing solo and Michelle McRae’s (Georgia) soothing voice, and you’ve got a hell of a community theater production. Kander and Ebb would be proud. The ensemble’s voices combined are nothing short of spectacular. Director Fred Helsel and musical director Gary Poirot deserve a standing ovation for their efforts.