The Kids Don't Stand A Chance 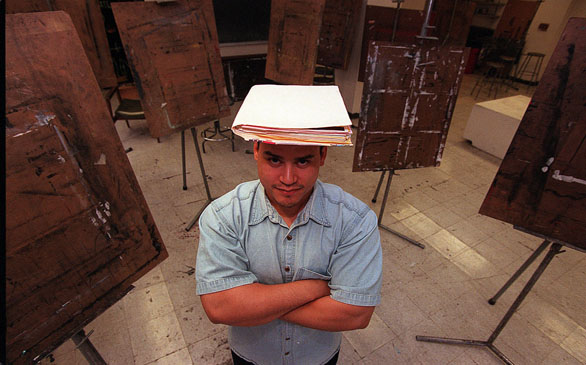 Scores of students are currently in default on their loans.
(Credit: Heather Stone/Chicago Tribune/MCT)

Earlier this year, amid reforms to help ease the burden of college debt for thousands of students across the country, President Obama said to his hopeful constituents, “In the United States of America no one should go broke because they chose to go to college.” Months later, and with his approval rating cooling like summer heat into autumn, those profound words ring naïve. This recession has hit every American hard, and for those with the status of “student” (whether high school grad, undergrad, post-grad, vocational school or graduate), the recession has rocked the foundation and promise of our education system.

NPR reported that the period since September 2009 till now, seven percent of students defaulted on their student loans, “the highest number in more than a decade.” This figure estimates that over 238,000 students are currently in default on their federal student loans. Those that defaulted the most, according to the report, are students who take out loans for at-profit colleges, which includes small trade schools like cosmetology and other name-brand colleges like the University of Phoenix.

Recently my little sister decided to go to a community college after applying and getting accepted to more prestigious Cal States and UCs, and I’m pretty sure money had a big say in her decision. There is growing concern whether it’s even worth it to go to college. Intrinsically, it’s a definite yes, but financially? I’d like to ask those 238,000 debt-ridden students.

The cost of a UC, according to recent figures on the University of California Web site, estimates close to $30,000, both living on or off campus. For a private institution, you’re looking at almost double or triple that cost. The cost of college has always been very expensive, that’s common knowledge, but its high cost is actually a very recent phenomenon associated with our generation (to which one term “the boomerang generation,” where young adults move back home after moving out for college, is a direct link to our financial desperation).

A very interesting article explains the history of the “student loan.” “The Kids Aren’t Alright: The Policymaking of Student Loan Debt” by Lawrence Bowdish explains that student loans are big business for private and intermediary lenders like Sallie Mae, which in 2008 collected $2.16 billion in interest on Stafford loans (loans backed by the federal government). It has been estimated that average student debt runs about $20,000 per person and will continue to climb.

This raises the question again: Is college worth it? No doubt those with degrees earn substantially more than those with a high school diploma. So the financial benefits of borrowing money would make sense. It’s a small sacrifice for a better, more secure financial life, security against a hostile job market, against competition for similar jobs and to become financially and independently stable. Wait, never mind.

It’s a hard American dream to live up to. When you don’t have the money to afford college and then you’re given the opportunity through student loans (which was the only way I could have afforded school, including taking on a part-time job), only to graduate in heavy debt, there’s a sense that maybe this system is screwing with the dream that is higher education. It keeps people from low-to-medium economic backgrounds from even trying. A whole segment of the population is turned off by the prospect that their dreams of advancing their life will not be rewarded, but punished.

Even if these were better economic times, the cost of college tuition would keep rising. This recession has only lifted the veil to the practices of student loans. But is there really a choice, to bite the hand that feeds you, as they say? Without loans, the opportunity for higher education is grim for the majority of us.

For those still in school or planning on taking out a loan, make sure to continually check your financial aid and that you understand what you’re getting into six months after you graduate when those collection letters arrive. It’s a horrible feeling and now it’s an official part of the college experience.

D-Day
A Meat-Eater and the Vegan Food Tour
3,164 views

D-Day
Know Your History: Or Be History
2,349 views