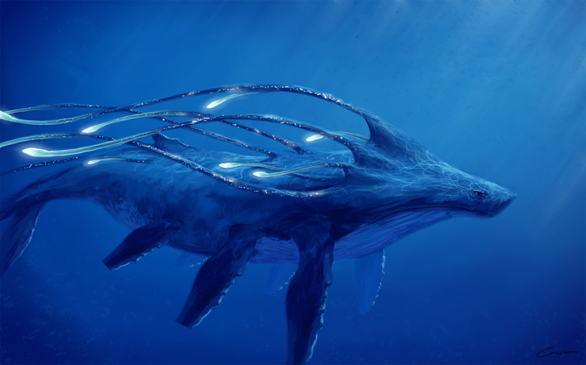 Mythical creatures and pristine landscapes line the walls of the first annual student exhibit at the Gnomon Gallery on Sept. 11. The exhibit showcases the talent of both current students and recent graduates of the Gnomon School of Visual Effects in Hollywood. The school prepares students for careers in the video game and visual effects industries.

The more than 70 pieces in the exhibit are either stills or sculptures. Gnomon founder Alex Alvarez relays that seeing animations as stills is a beautiful art form.

“It’s nice to see them in a more traditional image,” he continues.

The pieces vary from projects for class to personal endeavors; however, there is a whimsical element present in all of them.

Jorik Dozy, a recent Gnomon graduate, has four landscape stills on display. One of his pieces, We Turned Into Old Souls, is a tribute to The Lord of the Rings trilogy. The picturesque landscape shows the view of a sunset as thick clouds roll overhead. Two people can be seen in the foreground gazing at the scene in a mountain range.

“I love landscapes,” Dozy says. “What appeals to me the most about them is you need to know everything. You’re making the whole shot, not just one part of it.”

This is the first piece he has shown in a print format, and Cacciamani admits that when he looks at the print, all he sees is mistakes.

“It’s not meant to be shown printed,” Cacciamani says about the piece. “But it’s really cool to be shown in print.”

The piece is a close-up of a robot who appears to be falling apart. Upon closer analysis, it becomes apparent that the robot is committing suicide. Cacciamani favors working on figures that are simple to model but have great composition and lighting.

Peter Straub had a sculpture on display that he created as a project for a class at Gnomon. As a part of the project, students in the class had to draw a concept from a hat, and Straub pulled out “hob goblin,” so he decided to create a sculpture in tribute to The Lord of the Rings trilogy. Straub spent the 10-week course creating the sculpture.

He explains the process as beginning with a broad concept and adding depth to the character in order to design accordingly.

The exhibit will be on display through mid-November and is open to the public free of charge between the hours of 10 a.m. to 6 p.m. every weekday.

The Gnomon School plans to have another student exhibit in the future.

The pieces for this exhibit were chosen based on submitted pieces from students and recent graduates.

According to Alvarez, there is an interesting mix of work displayed from younger students in their first or second term. Alvarez describes the students at Gnomon as “a superstar audience to teach.” Many of the students are “young artists trying to get into the industry, as well as more experienced artists coming in to hone in their skills.”

Over the past 13 years, Gnomon has evolved to meet the demands of an ever-changing entertainment industry. The graduates of Gnomon continue on to work at leading companies in the entertainment and video game industries. The school boasts a 90 percent placement rate among the 300-350 students enrolled per term.

Dozy now works for Industrial Light & Magic in San Francisco as a digital matte painter. Cacciamani is moving to Vancouver in two weeks to work for Pixar Canada as a lighting apprentice. Straub works for Gentle Giant Studios in Burbank as a character modeler.