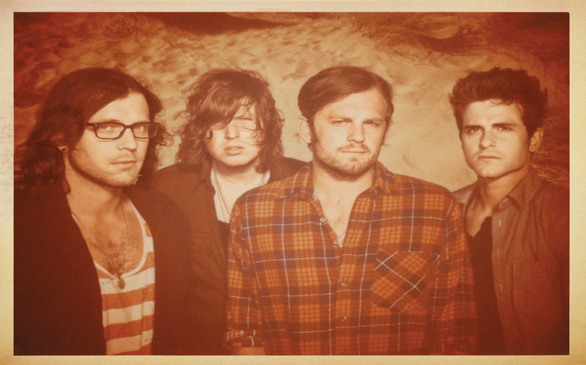 Want to know the best thing about this album? By the time this issue goes to print, Real Ghosts will have been available for a whole day already, meaning it should have been in your possession for said day, now that you’re reading this.

The album takes a very different direction from last year’s It’s Great to Be Alive, with frontman Chris Farren showing off the softer, more melodic end of his vocal spectrum for many of the tracks. The punk foursome continue to be one of the best things happening in modern rock with this release, however, despite Farren trading in his growls and yells for more emotive crooning.

I admit it, I totally found out about Aloe Blacc through TV placement, as I’m sure many others did. I hate to be that dude, as someone who prides myself on my music-finding ability, but after hearing other selections of his work, I got over incriminating myself in revealing how I got into him. Taking a classic soul vibe and modernizing it with a darker, almost gritty edge, and sprinkling in elements of traditional jazz and contemporary hip-hop, Blacc pulls in influences from across genres and eras for what promises to be a masterfully produced album.

OK, so, with the release of this album, Bad Religion has consistently been making music for 30 years now. 30 years. Meaning, they’ve been punk rock badasses longer than I’ve been alive. With the exception of drummer Brooks Wackerman, they’re all old enough to potentially be my dad. Granted, I wish my dad was as politically outspoken and generally as awesome, but the point remains that they’ve earned icon status by now. And despite the fact they helped charter the modern punk scene, they remain as active as ever, and as capable as ever of drawing in new audiences.

That’s the sign of true craftsmanship and authenticity as musicians. The fact that even after all these years of making music, the band hasn’t lost one bit of their biting edge and willingness to challenge the powers that be in politics and society. I can only hope that I’m still that committed to my beliefs at that age.

While the L.A. natives’ earliest albums are full of sentimental value for punk rock diehards, each consecutive release is right at home on the album shelves and in the iPod file folders of each new generation to discover them. This one will assuredly be no different.

As you may or may not have gathered from the other big column I’ve written in this issue, Jimmy Eat World just might be the undisputed kings of writing the timeless anthemic modern rock album.

No matter what stage you’re at in your life, what your past experiences or current situation are, there’s a Jimmy Eat World song and album that are the soundtrack of your life. You may not know it yet, but they’ve written one specifically for you. And when you hear it, it’s going to blow you away how perfectly it sums you. It’s practically got your name in the title.

I don’t think they practice any kind of villainous sorcery to gain such psychic access to you, but their ability to practically tear pages out of your nonexistent diary will make you wonder if they do once or twice.

Possibly the catchiest indie-folk band you may ever hear, well, at least this year, the Avett Brothers might actually be restoring the good and honorable name of both the banjo and the upright bass as legitimate instruments in mainstream bands. While bands that put out live albums sometimes struggle to make them sound like anything other than versions of their songs bootlegged from the radio with a ’90s cassette recorder, half the magic of an Avett Brothers show is the intimacy they create in live settings. Even if you are only listening to a recording in the end, these guys can still make you feel like you’re front and center for a backwoods jam session.

Bring Me the Horizon – There is a Hell Believe Me I’ve Seen It. There is a Heaven Let’s Keep It a Secret. (Epitaph)

This one is less an album that’s worthy of anticipation and more just the peak of morbid curiosity. I’m absolutely dying to know if the British hardcore band can put out an album that’s worse than their last one and have kids eat it up still. It’s … like a science experiment gone terribly awry, that I can’t abort.

This is possibly the most legit album to come out this year that qualifies as a pseudo-pop album. Walking a fine line down the middle between big anthemic rock and dark, gritty, atmospheric indie, this duo can make bigger sounding music than two people should be physically capable of making.

The funny thing about Mark Ronson is that he leaves me with a bit of a dilemma. I’m always utterly torn as to whether, given the opportunity, I would rather steal his musical production skill or the contents of his closet. The dude’s an amazing musician and producer, but man, he’s a really snappy dresser too. Since it looks to be a while before I can raid his wardrobe unbeknownst to him, I seem to be stuck having to settle on getting a copy of his new album. Granted, he looks to have some awesome and varied guests on it, including the likes of Alex Greenwald, Q-Tip, Simon LeBon, so it might be enough to hold me over. And no, I at least won’t attempt to steal that.

It’s been a good five years since Sufjan Stevens last put out an album, and if the track selections he’s previewed thus far are any indication, the album’s going to be worth the wait. Stevens’ technical skill in instrumental and orchestral arrangement is on point as always, and his lyricism and vocals are as effortlessly emotive as ever. Stevens’ latest effort will satisfy the inner bougie art critic that loves to lord your cultured-ness over your heathen friends without having to sacrifice the big, sparkling choruses that the closeted teen girl in you loves to sing along to when alone in your bedroom.

This album can’t come soon enough, even though it feels like just yesterday that they were putting out Only By the Night and that everyone and their mom were suddenly realizing that this band was actually kind of awesome. Given that they’re kind of that band now, and that there’s likely a lot riding on this album having a ton of radio hits for a lot of people involved, here’s hoping they don’t pull the classic move of botching it sophomore slump-style. Even though this fifth album puts them more at like, grad studies level. Or something.

A more recent discovery, I’ve been entirely stoked on this band since said recent discovery of them. Mellow and atmospheric indie that manages to avoid the frequently seen pitfall of becoming monotonous and forgettable that so many similar bands fall into, the Brooklyn natives upcoming debut promises to be as memorable as it is emotive. But then, each of the band members has a lot of experience at this whole music and bands thing, so it shouldn’t come as any surprise that they’d turn our a very legit album together.

Every Time I Die – Shit Happens: The Series? DVD (Epitaph)

Now, if you want hardcore done right, the Buffalo natives of Every Time I Die are your dudes. In the event you can’t make it to that Chain Reaction show they have coming up, or are terrified of being in such close quarters with an ETID crowd and the members of ETID themselves, you can experience the madness and chaos of one of their shows, concussion-free, from the comfort of your living room. Then afterward you can, y’know, man up and grow a pair.

There for Tomorrow – Re:Creations EP (Hopeless)

The dudes have been tweeting and dropping hints about this supposed remix album of tracks from their 2009 album A Little Faster left and right lately, and it really can’t come into existence soon enough. And by existence, I mean my possession specifically. The band’s last album is an absolute killer collection of infectious and hard rocking jams, but the dudes have done a lot of growing up since its release, so new takes on some older material are a welcome addition to their musical repertoire.