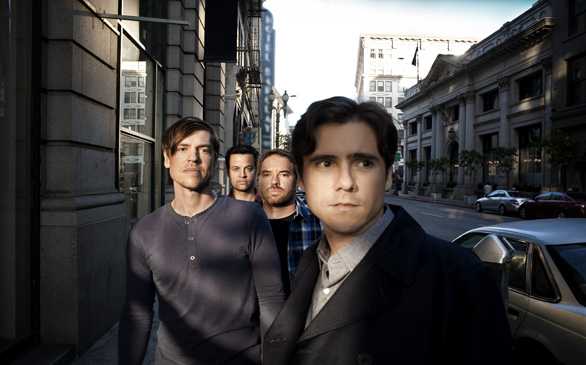 I know this is something of a big statement, but you know what? It’s the first show of the Fall Show Guide. Let’s go big or go home with this one, yeah?

OK, here it is: Muse puts on the best live show of all time. Of. All. Time.

Yeah, I went there. I beat that dead horse one last time because only a Muse show could actually warrant it. They’re that good.

Saying that I’ve seen the trio play at the Wiltern circa the Absolution album era, right around 2004, is one of few Cool Brag stories I’m still willing to spout off about, because it’s still one of the most memorable shows I’ve ever been to. It still boggles my mind a bit that they’ve gone from playing a single night at the Wiltern to playing the venue of all L.A. venues, but if there’s one thing frontman Matt Bellamy knows how to do, it’s leave a lasting impression. From his stage presence to his unparalleled vocal range, the dude is a full performance package, making Muse one of few bands that isn’t made any less legit by having a huge production stage show.

I have to admit, I’ve done a complete 180 on this band in a very short span of time. I went from being of a mind that Vampire Weekend could never make another album again, for all I cared, to being mildly apathetic while at least being able to respect the fact that not a lot of bands can really do their style of music, to finding myself absentmindedly singing along to the lyrics of “Giving Up the Gun” in my car when driving alone.

They did it. They got me. They sucked me in. And I hated them for it for a good while, too. I might’ve been a little self-loathing at the realization as well.

Next thing I knew, I was giving their first self-titled album a second listen and finding more tracks that I really didn’t hate all that much. It’s like some horrible addiction and I’m already on the downward spiral leading to an eventual collision course with rock bottom. Thanks a lot, dudes.

So often, an indie band puts out a catchy song, or even a catchy whole album, and you get stoked because of how catchy it is. Then one by one, those songs get released as singles and you find your enthusiasm wavering. Not because they’re singles or anything, but the more you hear those songs everywhere you go, the more you get sick of them. To the point you start to get a little pissed at the band for writing music that makes you so violently angry now.

The Black Keys, luckily, are not one of those bands. No matter how many times you hear their songs, even the ones that are years old now, it’s impossible to get tired of hearing them. The Ohio-bred duo just writes such perfect mood music and are such masters of creating a sonic atmosphere in each track, the songs go far beyond catchy verses and choruses.

I’m going to go out on a big limb here with the following statement: Jimmy Eat World is one of the last truly iconic bands to rise out of the contemporary rock of the last decade. Even though the band has been making music since long before Bleed American was released and plenty of longstanding iconic bands have put out music in the last 10 years, they just stopped making bands like this after Jimmy Eat World started breaking into the mainstream around 2001.

Though critics and elitists like to list 1999’s Clarity as their favorite from the Arizona foursome due to it being their last album produced in the confines of pre-MTV and radio obscurity, the band has consistently put out solid rock of the highest quality well after. With an oeuvre that perfectly chronicles the trials of growing up at every stage, there’s not a single Jimmy song that feels too young or too old, regardless of your background as a listener. Few bands these days are as skillful at making albums that are actually timeless and accessible to such a broad range of audiences without having to dumb down their work in the slightest.

Although, just to be fair, if ever there was a modern band who has a legitimate shot of outlasting scene trends to someday be an iconic band, I’d put good money on…

Yes, yes, yes. So much yes to this show. So much awesome packed into this show between these two bands. Granted, nether of them are the actual headliners of this show, but they should be, because they’re both just that good. The Florida natives of There for Tomorrow are one of the best bands coming up in the modern pop punk scene, even though “pop punk” is a bit of a short change on the band’s skill levels. While they are indeed infectiously catchy like their genre and label mates, the foursome write adult music that is both intellectual and emotive in a meaningful way at the same time. With a live show that’s just as energetic, these things together put them years beyond their contemporaries, despite being on the younger side of the pack.

I’ve said it many times over and I’ll say it again, Jenny Lewis can do no wrong. Even if she is performing with her … boyfriend. Whatever (cue my own indignation).

Yet another band that has been hauling ass in the name of making good music for years and is finally get some well-deserved recognition, the fine men of Anberlin also put on one of the best rock shows around. Having grown from being a leader of the Warped Tour emo-pop pack into a full-fledged adult-sounding rock band, these guys have only gotten better with age since they started. As much as I do love the days when frontman Stephen Christian would push the harder end of his vocal range, their shift to more melodic stylings has sounded nothing but organic and natural.

All too often, bands have that sudden epiphany that they want pre-teen girls to buy their albums and end up failing miserably with a sudden stylistic change toward pop branding. Instead, Anberlin has opted to simply make more grown-up music as they themselves have grown up, and it’s been nothing but awesomeness in the process.

Interpol seem to be one of those bands that is a good judge of character. Not so much in terms of the people the band members are friends with or anything, but more in the sense that you can ask any random person on the street what their opinion of the band is in order to get a pretty decent look into their psyche. Go ahead, test it one day. Ask someone you know what they think of Interpol. If they reply that they don’t like the band, you may not want to trust or socialize with that person anymore. They’re probably stealing from you, trying to hit on your significant other or attempting to kill you in your sleep. Or worse yet, they’re probably that one friend you have who is always talking about how stoked they are on the new Nickelback album.

While many other girls fronting bands like to use their stage time to indulge their egos and needs for attention without any of the actual musical skill to back up that bravado, Sierra Kusterbeck is doing good work to restore the name of girl-fronted melodic rock bands. A powerhouse vocalist with a charming likeability, Kusterbeck doesn’t need to resort to cheap gimmicks to command the attention of an entire audience. She also isn’t hesitant to share the spotlight with her equally talented band mates either, but then, guitarist Blake Harnage and bassist Devin Ingelido are both really good at their respective instruments too, so why would she? Though they’re still playing smaller stages, rest assured they’re only going to be moving on to bigger ones from here out.

I know the year is still only about 75 percent over, but I’m just going to say that Circa Survive might have put out the best album that was released this year with Blue Sky Noise. Maybe that’s a premature claim, but other bands have been hard pressed to match the sheer epicness of that album, with a few close calls, but none that have yet surpassed it. From heart-wrenchingly dark to hauntingly atmospheric to sweepingly anthemic, this is about as artsy as the post-hardcore scene gets.

Florence and the Machine

Things seem to have taken off for Florence here really quickly and in a really big way, but you know, girl can sing. In a really epic way. And there’s as much artistry in her performance as there is in her songwriting, something few artists can claim without having to wear a deli platter to an awards show in order to maintain the persona.

This band has been criminally overlooked and unappreciated for entirely too long. The Florida-bred fivesome writes some of the most infectious pop punk out there right now, but unlike many of their contemporaries, they’ve managed to do it without coming off like a children’s band. Their last album proves they’ve legitimately graduated to being a band worthy of headliner billing on big stages, now it’s just a matter of everyone else also realizing this about them now.

I know San Luis Obispo is way, way outside of Los Angeles, but you know what? Man the eff up and make the drive up for a band like Alkaline Trio since they’re not actually playing within the confines of our fine city. The punk icons will make it worth your drive.

Just for the record, I don’t dance. Like, at all. One, because I’m a rock ’n’ roll dive bar boy at heart and the idea of socializing with Hollywood dance club types makes me nauseous. Two, I’m … not very good at the whole foot-eye coordination thing, but that’s still secondary in importance to the first point. But all of that notwithstanding, I still totally love Robyn’s dance songs. Just because I don’t dance to them doesn’t mean I can’t still appreciate them, thankyouverymuch.

Every Time I Die

Right around this time of year, you’ll be nearing the end of your fall semester and holiday time is right around the corner too. The rest of existence is going to make you want to punch yourself in the face repeatedly at about this time every year, so why not see one of the best hardcore bands around at one of the smallest venues in SoCal and let someone else do it for you? And by someone else, I mean ETID frontman Keith Buckley. Granted, it seems counterintuitive to what the band is all about by having this show at an all-ages venue that doesn’t serve alcohol … maybe they were all raging a little too hard when booking this particular show, but Buckley and his crew are a band you can put your faith in, so I’ll withhold judgment for now.