You Will Meet a Tall Dark Stranger: Lucy Punch is a knockout. 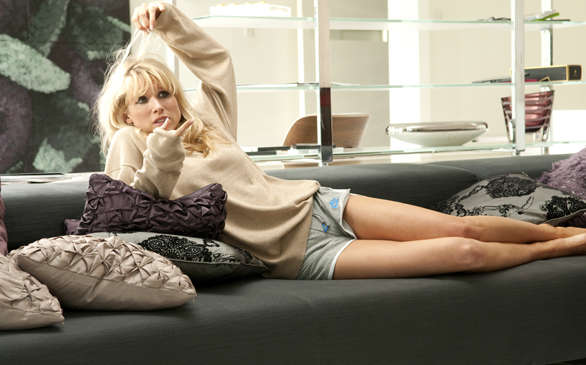 Lucy Punch is having a TKO year. The 32-year-old British actress has spent the last year working with the likes of Steve Carell, Kate Hudson and Justin Timberlake, is about to start production in Nick Cassavetes’ new film and stars alongside Anthony Hopkins, Naomi Watts and Josh Brolin in Woody Allen’s latest film, You Will Meet a Tall Dark Stranger, stepping into a role at one point occupied by Nicole Kidman. Not bad considering just before she won her part in Allen’s film, she’d been out of work for over a year and was considering a new line of work.

Settling into a suite at the Four Seasons in Beverly Hills, tall and lean, in a sheer fuchsia blouse and dark trousers, gold bracelets climbing up her arms, Punch explains that getting to be in Allen’s film took a lot of hard work and a little luck, all beginning with an audition on tape because, “Woody didn’t know who I was,” the actress offers good-naturedly. Liking what he saw on the tape, Allen invited Punch to New York for a meeting.

“Usually when you’re close to getting a part, the studio will pay for a [plane] ticket,” Punch says. “But because it’s Woody and [his movies are] always low budget and every actor wants to meet him, you pay for your own ticket. I was completely broke at the time, but I was like, ‘Of course!’ The night before I was supposed to go, I found out he’d given the part away and I was devastated.”

She jokes that when she found out it was Kidman who’d been cast in the role, “I was more understanding,” though still heartbroken.

“But she dropped out!” Punch grins.

Still, the part wasn’t hers that easily.

“I really had to prove myself to him,” Punch continues.

After another round of auditions, where she was asked to do “a number of scenes from the script,” she had what every actor dreams of; a part in a Woody Allen film, something Punch sums up as, “Insane and very intimidating.”

You Will Meet a Tall Dark Stranger follows what happens to a pair of troubled married couples, Alfie (Hopkins) and Helena (Gemma Jones) and their daughter Sally (Watts) and her husband Roy (Josh Brolin), as their relationships fracture. After Alfie and Helena separate thanks to his growing late-middle life crisis, he takes up with Punch’s character, Charmaine, a call girl from the wrong side of the tracks who’s thrilled to find a sugar daddy. It was a part that required a very particular – and skin-baring – look that Punch describes as, “that kind of really unsubtle sexy that’s vulgar and almost a little repulsive.”

“Woody wanted her to be very sexy, so I went to my last audition really dressed as the character,” Punch recalls, chuckling. “I was getting some serious wolf whistles from construction sites and I thought, ‘OK, I’ve got this down. I’m attracting the right kind of disgusting attention.’”

Even after landing the role, Punch didn’t meet the notoriously retiring director until she walked onto his set the first day.

“I’d spoken to some actors who’d worked with him before, so I knew I’d get very little [in direction],” she says. But that didn’t stop her from using her time with Allen to the fullest advantage.

“I had a hundred gagillion ideas which I was constantly pestering him with,” Punch admits, “and he was like, ‘Don’t tell me, just do it. I don’t need to hear about it.’ It actually gave me a huge amount of confidence that he put his trust in me.”

Allen doesn’t need to be verbose to get the most out of his actors. For Punch, it was three little words that made all the difference in her performance. “One day I was doing a scene and I got a laugh from the crew and I thought, ‘I’m doing a good job.’” That was until she caught the eye of her director. “I looked up and [Woody mouthed], ‘Stop being funny.’ And he was right! This is the sort of part where it would be very easy to go bananas, but the style and tone of his films, the comedy is really grounded. As outrageous as the character is and looks, I was always aware, having Woody’s eyes on me, to be truthful.”

You Will Meet a Tall Dark Stranger releases in select theaters Sept. 22.