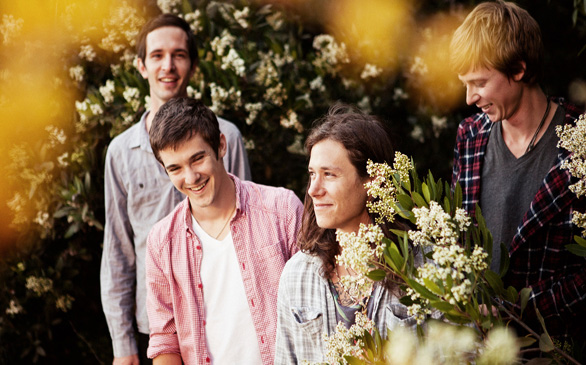 Though only 24 years old, listen to Fake Problems frontman Chris Farren on stage behind a microphone and you’d swear he was a grizzled punk rock lifer who had hit rock bottom at least once in his life. Maybe multiple times. With a distinctive voice that conveys a hard-earned level of life experience that’s far beyond his years, the Florida-bred singer has made quite a name for himself as an up-and-comer in the modern punk scene. Along with his band mates, guitarist Casey Lee, bassist Derek Perry and drummer Sean Stevenson, Farren seemed poised to take the reigns on a wildly changing genre and bring it back to its piss and vinegar sonic roots.

Except he kind of got over that whole “being pissed off at the world” thing while recording the band’s latest album, Real Ghosts Caught on Tape.

“I didn’t want to be angry anymore. And the first step is to just stop singing about how angry you are all the time,” he says with a laugh. “That’s kind of what the lyrics in the song ‘Grand Finale’ are all about, just letting it all out and starting anew, as stupid as that sounds.”

Though Farren admits some of his own friends were slightly disappointed by the album’s shift to a more melodic direction, away from the grittier vibe displayed on their last album, personal satisfaction needed to come first this time.

“I wanted to scream less and sing more. That was something people were kind of bummed on, but I don’t want to be yelling all the time. The lyrics don’t call for me to be yelling. That’s not what the songs are about,” he says. “It’s not an angry record, it’s more reflective. It’s still upbeat though, because we didn’t want to make a slow, sad record.”

The stylistic turn seems to also mark a personal change within Farren, something he himself is keenly aware of.

“The last year was just a really big bummer. We had a lot of stuff happen to us. We had people die, in all our families, people that were close to us,” he says. “We were just compelled to be a little more serious about everything, more focused and talk about things that really matter to us.”

And even for as open as Farren is with his lyrics, disarmingly so at various points on Real Ghosts, he admits that’s still only the tip of the proverbial iceberg.

“There’re things that have happened that I just won’t write a song about.”

Listing a wide range of stylistic influences, from Bright Eyes to Glassjaw to Saves the Day to Bad Religion, it’s clear where Farren gets both his penchant for pointed lyricism and his ability to convey raw emotion. Though, he does jokingly admit to a not-so-secret appreciation for the more stereotypical (read: more awful) romantic comedies as well, which may or may not play a role in that.

Regardless, his honest and emotive storytelling appears to have worked in the band’s favor, earning the foursome a dedicated following that grew with each new audience they encountered during their stint on this year’s Vans Warped Tour.

“We didn’t try to be ambiguous about who we are with this record; we put it right up front. That’s why there’s no strings or horns or anything crazy on this record. It’s just what the four of us are.”

While the band’s punk rock beginnings are still readily apparent on their latest album, so too are some new influences, as witnessed on the Motown-influenced “Soulless,” for which the band also recently shot a music video.

“‘Soulless’ and ‘Grand Finale’ were the two hardest songs to finish. ‘Soulless’ went through a lot of different changes and we were going to scrap the song altogether, then we decided to give it one more shot, changed it around to give it this Motown, soul kind of beat, and that’s what took it to a whole new level for us,” says Farren. “For ‘Grand Finale,’ it was just trying to get the right lyrics and vocal melodies for it. We had everything done, but on the last day we were in the studio, I was there from like, 3 p.m. to 9 a.m. just working on that song. We wrapped, and I was up for like, 24 hours. It was crazy.”

Farren may have sung of being soulless on Real Ghosts’ lead single, but seeing the members of Fake Problems’ newfound sense of direction, inspiration and motivation is proof they are anything but.