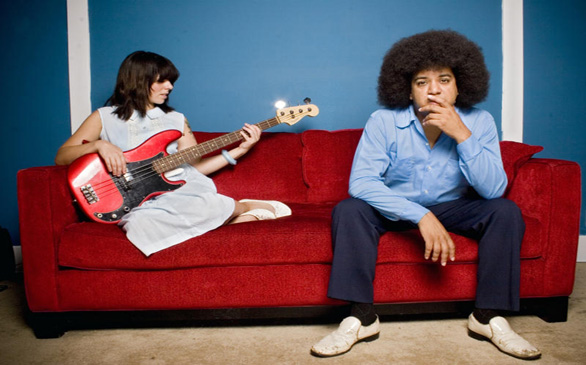 A few facts about Los Angeles-based Mad Planet, a duo consisting of couple Cooper Gillespie (bass, vocals) and Greg Gordon (drums, sequences): The pair met when they were both bartending at the now-defunct Hollywood nightclub Safari Sam’s, their new album, All Elephants, was recorded in their Silver Lake apartment and Gordon has one of the biggest ’fros in the business.

Mad Planet plays electro rock with occasional forays into trip-hop, and even though Gillespie has a penchant for sounding sweet, many of the songs lyrically deal with less-than-joyful matters.

“I was in a deep, dark place when I started writing the album,” says Gillespie. “I had just gone through a divorce, and a family member was institutionalized. I found writing to be very therapeutic and healing. It helped me work through those things and deal with the loss.”

All Elephants is available now, and Mad Planet performs at the Viper Room Sept. 29.

From the Land of Ice and Snow

The folks at Portland label Jealous Butcher Records have been putting together a Led Zeppelin tribute album for a couple of years, and now it’s ready to “Rock and Roll.” From the Land of Ice and Snow: The Songs of Led Zeppelin is a 33-cut various artists compilation featuring acts from the Pacific Northwest like M. Ward, Chris Walla, Laura Veirs and Mount Analog, Rebecca Gates and the Consortium and the Long Winters.

Loch Lomond, Knock Knock, Tu Fawning, Pellet Gun, Testface and Kind of Like Spitting are among other contributors to the two-disc compilation. A portion of the album’s proceeds go to First Octave, a music education-based organization working for increased music curriculum in schools. Grab your copy Oct. 12 or pre-order From the Land of Ice and Snow now at jealousbutcher.com.

The Bay Area home of Rob Flynn, guitarist and singer for Machine Head, was burglarized in early September, and some priceless items were taken. Thieves took the guitar that Flynn recorded the first Machine Head album, Burn My Eyes, with, his son’s mini Flying V and a guitar that was given to Flynn by late Pantera guitarist Dimebag Darrell.

Flynn is offering a $1,000 reward for the safe return of the Burn My Eyes guitar, described as a black Ibanez Strat, and a $2,000 reward for the return of the Dimebag guitar, described as a blue Washburn Dimebolt prototype. Pictures of the guitars can be seen at the band’s Web site, machinehead1.com, and anyone with a lead is asked to make contact by e-mail at mike@machinehead1.com.

Sevendust is headlining this year’s HardDrive Live Tour, and the local stop happens to coincide with that most special of nights, Halloween. The tour is produced by HardDrive and HardDrive XL in conjunction with their weekend and nightly syndicated radio shows, and the outlets will be promoting the tour with ticket giveaways, artist meet-and-greet passes and VIP packages. Listeners also have a chance to win “fly-in” packages to see the show when it stops in Atlantic City, N.J., and on the tour’s final night in Orlando, Fla.

Since October, 10 Years and Anew Revolution will also be on the bill when HardDrive Live comes to the Anaheim House of Blues Oct. 31. Contest details can be found at HardDriveLiveTour.com.

A Book for Guitar Players

The Recording Guitarist, a new book by Jon Chappell, is designed to help guitarists know what to do when they hit the recording studio. Chappell points out that there is a significant difference between playing guitar live on stage and the way it needs to be played in the studio, and the book details how to best deal with the recording process whether it be in a well-equipped studio or at home with a desktop setup.