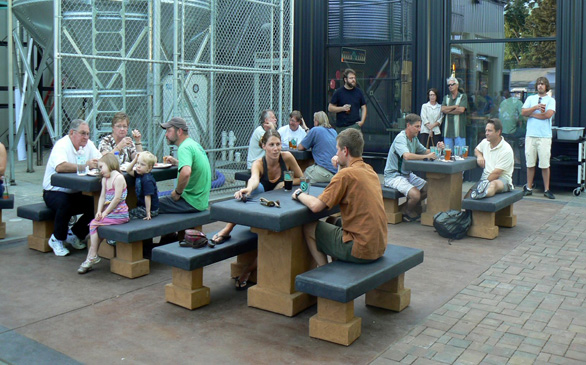 With each passing year, colleges and universities spit out thousands of eager young men and women looking to make their place in this world. Unfortunately, the current economic forecast does not bode well for this new generation. As a result, many graduates find themselves moving back home with their parents or trying their luck in the big city. But there are several cities across the United States that are the financial and professional “roads less traveled.” They offer the same amenities that the 18-34 demographic has grown to love (exciting nightlife, culture, strong local economy) but with less congestion.

Jersey City, N.J., has been called the “sixth borough of Manhattan.” The reason is its close proximity to New York City: a trip on the PATH train is a mere seven minutes from Jersey City’s Grove Street stop, and 15 minutes from Journal Square. Aside from transportation, rent is much lower than in nearby New York. Downtown Jersey City is home to a number of rental properties, including one and two-bedroom, railroad-style apartments starting at $900. The job market is ultra competitive here. However, every industry known to man has a foothold in Metro New York. What’s more, there are plenty of smaller jobs (survey taking, executive search, call center rep) that cater to recent college grads, while still offering a competitive wage ($12-$20 per hour).

Shreveport-Bossier, La., has emerged as the Hollywood of the South ever since Hurricane Katrina halted filming in the state. These cities are located just four hours northwest of New Orleans and offer a number of features that have grown in popularity among many young people. Shreveport houses a number of nationally recognized hospitals and schools. Sporting events are king, offering football and baseball fans ample opportunity to take in their favorite regional teams. For those pursuing careers in broadcasting or motion picture production, Shreveport-Bossier has several award-winning network affiliate stations and film crew jobs (productions like Mad Money and Steel Magnolias were filmed nearby). Rental and housing costs are also low: Apartments located within a five-mile distance to Louisiana State University at Shreveport start at $500-$680 monthly. Additionally, a two-bedroom, two-bath house in the popular Westwood area can be purchased for under $70,000. Culturally, Shreveport-Bossier offers a social climate better suited for those interested in moving away from the hustle of cities such as New York, Los Angeles or San Francisco. As of July 2010, Shreveport’s unemployment rate was 7.4 percent.

Bloomington, Ind., is a college town that rivals many others in the Midwest. It is a virtual mixed cultural bag, filled with hippies, hipsters and traditional folks alike. Many boutiques and independent art galleries have popped up around town, giving students at the local university ample opportunity to socialize. On the job front, blue-collar, administrative/clerical and science-based jobs are available – some compliments of the University of Indiana at Bloomington. Living expenses are also lower here; many apartments in the area start at under $600. The city’s unemployment rate was 8.5 percent as of July 2010.

The Pacific Northwest has been a draw for young families and singles due to its green-living initiatives and affordable housing. Oregon’s second-largest city (Eugene) is home to a top university and boasts ample outdoor activities for those who enjoy hiking, biking and rafting. The gender ratio is 94 to 100 (male to female), making dating among the 18 and over set numerically easier than in other cities. Jobseekers with strong backgrounds in administrative assistance should feel comfortable choosing from a number of professional opportunities available. While salaries are low ($35,549 on average for males; $26,721 on average for females), the cost of living is comparable. Rentals throughout Eugene can be found for well under $1,000 per month. As for unemployment, their average is 9.4 percent.

Finally, the nation’s capital, Washington, D.C., has risen as a promising destination for those starting out in life. The Dupont Circle neighborhood is gay-friendly; Tenleytown and Adams Morgan are highly coveted destinations for foodies, art and music fans (Members of the Walkmen grew up here.). D.C. is also racially diverse with many people from various walks of life finding common ground with one another. Rents are generally not cheap, but many of the outlying areas in Maryland and Virginia can be reached via the metro. While unemployment is at 10 percent, the variety of jobs offered is much more diverse than in other cities.