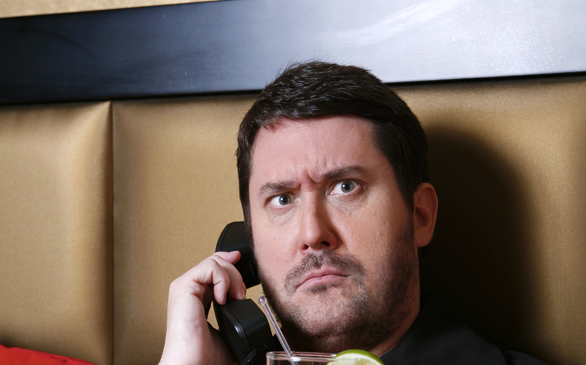 Doug Benson is funny in movies and on stage.

This week, I want to take a breather from my stodgy life as a film writer/lover/watcher. Not to say I could go even one day without watching a movie because it is most likely that I can’t. This also isn’t to say that I could keep my amiably eager mouth shut while screamingly appropriate movie quotes and allusions wish to escape upon the nudging of a casual comment made by an oblivious acquaintance; it has been ingrained in my DNA to effuse film trivia at all times and to share said filmic knowledge with people who don’t really care.

This rather impressive but useless ability is what brings me to why I must abstain this week from gushing about foreign films, documentaries, a certain genre, a certain filmmaker or whatever else I seem to find so much talk to frequently type into my Word document. A medium that is much more difficult than the moving image, is the live image. That is to say, live entertainment leaves much more up to luck and to the hope that nothing will go wrong.

If you strip a film of its director, the camera guys, the lighting guys, its film editing and sound editing and epic score, what you have left is real people who, without the pounds of makeup caked on to deflect a shiny forehead, might actually look like real people. And there is something comforting in that idea: that real people are behind the fictional people we see on the screen.

I would go so far as to say that is why we love comedians. They allow us to take things a little less seriously, and they unite us in the commonality of laughter. As Danish comedian Victor Borge once said, “Laughter is the shortest distance between two people.” At one time in history, comedy could only be found in writing. Playwright Oscar Wilde and author Mark Twain were a couple of the first writers to infuse their works with direct and progressive sarcasm, even when it was socially unacceptable. As Twain once said, “Humor is the great thing, the saving thing. The minute it crops up, all our irritations and resentments slip away and a sunny spirit takes their place.”

In a progression that has come to be thought of as very natural but that may in fact be the perpetuating inclination of Hollywood studios, many comedians have made the big leap from the written word to stand-up to movies and television shows, some with great success and others with minimal.

I may not be a comedian, but I like to think I have a sense of humor that could win a wrestling match with the average wannabe Seth Rogen. So coming from my limited (though perpetually growing) comedic experience, I’ve learned the organic evolution of a joke is shown in its most efficient light when it is not staged or reshot. Comedy does not have time to worry about lighting or camera angles because jokes are timely.

That is why this week Projections is dedicated to the hard-working comics who can make us laugh live or from a recorded program. Luckily, comedian Doug Benson who is best known for starring in Super High Me and for his quick quips on “Best Week Ever” can give us both a great movie and a live act. “Doug Benson’s Movie Interruption” is an offspring of “The Benson Interruption,” his beloved live show of stand-up at the Upright Citizens Brigade, and “Doug Benson Loves Movies,” his popular podcast.

This program, which is hosted by our friends at the Cinefamily on Monday, Sept. 27, brings together Doug and his friends (who include past participants like DJ/TV personality Chris Hardwick and veteran funnyman Brian Posehn) for a night in the front row couches of the Silent Movie Theatre with a mic that proves deadly as they provide hot-off-the-press commentary while the movie rolls on. To be fair, a member from the film’s cast is invited to jest in wholehearted fun along with the comedians and the audience. Past films in the series included a particularly brutal ripping on Friday the 13th Part III as well as the 2004 motorcycle classic Torque.

Can you take the heat?