Napoleon Dynamite and Primer:: A Tale of Two Indies 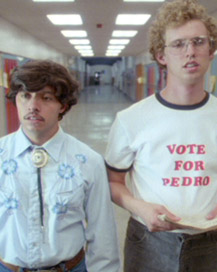 Big movie studios often try to “buy a gross” by spending so much cash on ubiquitous, multimedia advertising that the public can’t turn on the TV, or see a bus churning down the street, or buy a can of soda, without being reminded that Movie X is coming in only Y number of days. The studio then opens Movie X on a zillion screens at a zillion multiplexes. By the end of the all-important opening weekend, it really doesn’t matter if Movie X is any good. It has become so omnipresent that you can’t avoid it. The gross has been bought.

Independent distributors generally can’t afford to buy a gross. They have to make their films stand out with creative, aggressive marketing. This is the story of two such films, both purchased from this year’s Sundance Film Festival in January.

One, the breezy, quirky comedy Napoleon Dynamite, has tapped the teen market to become the indie success story of the year. It should break the $40 million barrier this week.

The other, the edgy, challenging Primer, hopes to build a dedicated audience. Together, they paint a picture of what it takes to convince filmmakers that their films will be noticed and to sell audiences on the kind of film that struggles merely to find screen space among the big guys.

The differences between Napoleon Dynamite and Primer were evident at the start of Sundance, the most important market in the country for indies in search of distributors.

But the reviews were mixed once it was shown, with older critics disdainfully comparing the film to a sitcom. And when Fox Searchlight coughed up $3 million for worldwide rights, some sniffed that the distributor had fallen victim to the same high-altitude sickness that led to ill-advised Sundance purchases in previous years.

“You saw the negative critiques coming out of Sundance, that we had fallen prey to festivalitis,” says Fox Searchlight distribution president Steve Giluia. Giluia rattles off the names of the most famous Sundance purchases that flopped in the real world: The Spitfire Grill; Happy Texas; Tadpole; and The Castle. That’s the kind of company no movie executive wants to keep.

Meanwhile, a tricky little sci-fi film called Primer had drawn some interest from two smaller distributors, Magnolia Pictures and ThinkFilm. “I really liked the mood and the look and the style,” says Mark Urman, ThinkFilm’s head of U.S. theatrical. “There was a whole series of feints and jabs. It was always telling me stuff that was very technical and specific, and as soon as I absorbed it, I realized it was all red herring.”

But everyone – especially the film’s writer-director, Shane Carruth – was shocked when Primer captured the festival’s Grand Jury Prize. “It was like an out-of-body experience,” he said soon after. The Grand Jury Prize may have been surreal. But it would eventually make a great marketing hook.

“One can’t put a dollar value on awards, but they’re never bad,” says Urman. “They never prevent people from seeing a movie. When the whole posture of a particular film is that it’s smart and goes into the marketplace with a major prize from one of the three most important festivals on the planet, then it’s consistent with a smart image and will attract the smart people that you need in the theaters at the outset, because they’re the ones who will like it the best and will represent it most vigorously.”

Fox Searchlight may be an indie distributor, but it has big studio backing – big enough to take a $3 million risk on a small comedy such as Napoleon Dynamite.

But for Coon, the Napoleon producer, Fox Searchlight’s marketing pitch was just as important as the cash. He saw how well the company had done with films such as 28 Days Later and Bend It Like Beckham, which had low budgets and no star power.

“You can’t just buy $20 million worth of ads and throw somebody’s name on it. You have to be more creative and find different ways of getting people to go see a movie based on the movie itself, not just on the typical star power.”

But Coon and the Napoleon bunch were being creative even before the deal went down. They came to the festival with their own promotional hooks, including large “Vote for Pedro” buttons, tying in with the film’s school election story line. As simple as it sounds, these are the kinds of touches that help a film stand out from the pack.

“There are always a few opportunities at these festivals, and you see a few films that very shrewdly exploit the media environment of the festival to create exactly the right kind of early warning system for the release that generates a lot of excitement about a film and leads to great box office success,” says Variety’s Jonathan Bing, co-author of the new book Open Wide: How Hollywood Box Office Became a National Obsession.

Carruth’s Primer deal took a little longer to consummate. But when the dust cleared about a month after the festival, he was happy with the results.

Both ThinkFilm and Magnolia offered a standard deal with little possibility of profit sharing. “If the film did well, it would have had to do Big Fat Greek Wedding well for me to participate in the profit,” says Carruth. “If it fails, I want to fail with it. And if it doesn’t fail, I want to participate in that.”

So Carruth, who has a mathematics degree from Stephen F. Austin State University, countered with his own deal: Put the upfront money into promotion and advertising, and shoot for a big chunk of backend profits. “ThinkFilm went for it, and Magnolia didn’t,” he says. “That was the end of it,” and ThinkFilm got it.