Alexander Gould: Growing Up on “Weeds” 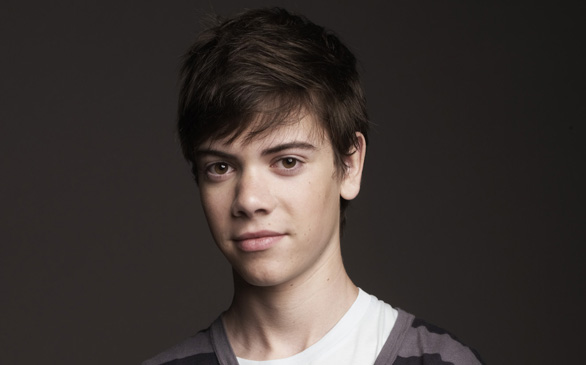 Alexander Gould is your typical 12th grader: anxious about his college-bound future, unsure about where he’ll end up and busy as hell. He’s also now a convicted murderer.

Gould, the 16-year-old cherubic actor best known for his role as the flawed but oddly inspirational Shane Botwin, ended season five of “Weeds” with a bang. After the cold-blooded murder of last season’s antagonist Pilar, Shane and the rest of the Botwin family are once again back on the run.

Gould notes that the new season “starts right where we left off. We’re going on the run, and everything is getting crazier. It’s a real fun season, a bit more lighthearted.”

The Botwin edition minivan ends up in Seattle, Wash., as the family reinvents itself as Nathalie, Avi, Mike, Shawn and (wait for it) Randy Newman amid budding pressure from the FBI and Esteban’s Mexican cartel. Gould comments that the reinvented family “tries to stay out of trouble but can’t. Fifteen minutes later they’re back in the drug-dealing game and back in trouble. Nancy can’t get her head wrapped around the normal life.”

Joining the likes of the Olsen Twins, Gould has led the dual life of being both a Gould and a Botwin.

“It’s been a wild ride the whole time,” he says. “I’ve literally grown up acting since I was 2. I’ve worked with most of the same crew members the whole time, and it’s really fun for everyone to see me grow up.”

Unlike laugh track-powered family programming like “Full House,” “Weeds” was and will remain a rather adult-oriented show based around drugs, sex and the wonderfully hypocritical nature of modern suburban life. It is a decidedly rated-R TV show, and one has to wonder how the child-rearing process works on a show with such material.

“When I started I had no idea what the show was about. I was pretty naïve to it all, and everyone kept me out of it. As I’ve gotten older I’ve learned a bit more and I’ve had to go back and catch up on everything. I look back and say, ‘Ohh that’s what was funny.’ I remember filming certain scenes and thinking, ‘Why am I saying this,’ but now it fits into the whole thing. It’s funny.”

As bizarre as the show’s marijuana-laden subject matter might be for a budding child actor, Gould’s naiveté fueled some of the more important character traits of Shane Botwin, who himself was unaware of his mother’s criminal activities for most of the earlier episodes.

“He never knew what was going on. As time came around, he learned about the operation and he became almost the moral compass of the family; telling his family what was wrong and what was right.”

While the ethical ramifications of raising a child on a TV show can be dealt with subjectively, Gould wouldn’t trade it for anything.

“I’ve had some experiences that I wouldn’t have had otherwise and I’ve learned things earlier than I would normally have. I consider myself more mature because of it.”

So, what’s next for a 16-year-old actor on an award-winning premium cable show? College, of course.

“I’d love to keep acting and I’m looking for work at the moment, but it’s time for me to focus on school and being a kid as well. I am college bound at the moment, not sure where yet, but I’ll never stop acting.”

Like most L.A. natives, Gould isn’t entirely crazy about the city itself but realizes it’s better than Kansas City.

“I’ll be OK as long as I’m on the east coast or the west coast.”

While the series is well into its sixth season, “Weeds” continues to put up extremely solid numbers. The sixth season premiere of “Weeds” delivered the series’ best night ever in total viewers and one of the biggest nights in Showtime’s history. While the Botwins might be on the run, viewers clearly are not.

His upbringing on screen might be considered anything but traditional, but Alexander Gould remains an extremely talented and bright young actor with the world at his fingertips, just as long as he passes the 12th grade.