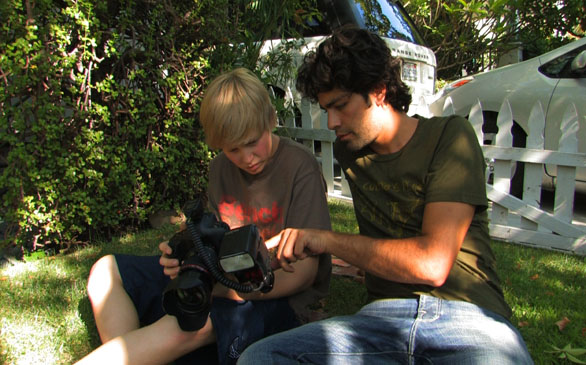 There’s a bitter irony about the hunter suddenly becoming the hunted. That is the underlying premise of Adrian Grenier’s documentary, Teenage Paparazzo.

At the age of 14, when most kids are hanging out at the mall and learning the subtle intricacies of rebelling against their moms and dads, Austin Visschedyk was snapping images of Hollywood A-listers and building a career for himself in the process. Through happenstance, the teen paparazzo aimed his lens at Grenier, who was instantly struck by the photographer’s obvious youth. The mere shock of a kid that age bombarding him with clicks and flashbulbs was enough to inspire the actor to turn the tables on the child shooter. The teen paparazzo would become the subject of Grenier’s documentary.

Grenier follows Visschedyk through the streets of Los Angeles, learning about his craft, the industry in which he works and the kid, himself. For all intents and purposes his subject is just like any other 14-year-old (Visschedyk is now in his late teens.). He’s a bright-eyed skater kid with a smart mouth and Justin Bieber hair. But he’s also incredible savvy and mature beyond his years. He understands that he’s living in a moment that may not follow him into adulthood. He, as well as his parents, seems perfectly content exploiting this fact.

What surprised me the most about Teenage Paparazzo was how in-depth it is. In the hands of any other filmmaker, this subject matter could have become a cheesy, exploitative and derivative nod to bratty teen shenanigans. Instead, Grenier looks at the culture of celebrity and dissects it, limb from limb. The audience has the rare chance to hear from the purveyors of lust and must (tabloid writers and editors) who dish about why they do what they do and what goes into making their magazines so popular. But Grenier examines the phenomenon even farther and has doctors and other assorted members of the anthropological think tank take a stab at why we’re so celebrity-obsessed. He even explores Visschedyk’s role as a cultural antihero. Rounding out the discussion are conversations with a number of famous entertainers, including Paris Hilton, Whoopi Goldberg, Eva Longoria Parker and Alec Baldwin.

Teenage Paparazzo is smart, stylish, very funny and just plain cool. But it’s the evolution of Grenier and Visschedyk’s relationship that is the true heart and soul of the film.