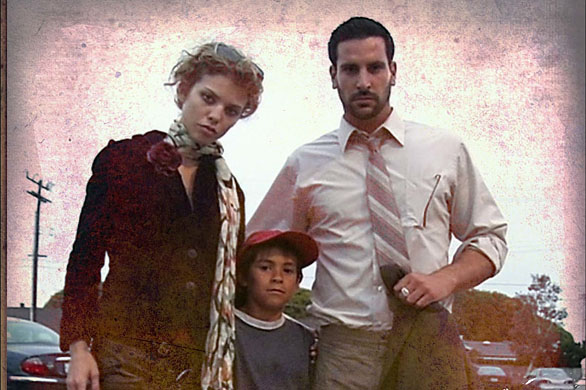 Just because something has been done before does not mean it’s any less powerful or thought provoking. The vampire craze may be a difficult example (seeing as most of that genre has been vastly corrupted by studio films trying to squeeze one last dollar out of the characters), but it is the humanity of the story that keeps us buying tickets. If the good did not prevail in the end, what do we have left?

Human trafficking has been on the butcher’s block lately, most notably because of last year’s hit Taken starring Liam Neeson as an ex-FBI agent who had to kick the ass of every Mafioso member in Europe to save his daughter from becoming a sex slave.

Amexica is a short film by Ron Krauss that struggles, on a much smaller scale, to make a similar case for human trafficking and the need for awareness. AnnaLynne McCord from the new “90210” and Joseph Ferrante star as Man and Woman, two con artists from Los Angeles who have bought, or maybe rented is a better word, a young boy from Mexico.

The plan is to pass him off as their son and extort money from unknowing victims who happen to be driving by when the boy is thrust into oncoming traffic. The boy who is presumably unable to speak English takes to their routine too easily, changing the lives of everyone involved.

Amexica is a poignant portrayal of cause and effect, the ebb and flow of criminal life in America, which, as the title implies, relies heavily on our neighbors to the south. The title is an obvious portmanteau of “America” and “Mexico” and has been applied in several ways, mainly pejoratively to refer to the corruption of the United States by Hispanic influences. However, this film spins the magnifying glass around on American society, which is too focused on getting rich quick with a consequent, ever-diminishing sense of morality.

Although it lasts less than 30 minutes, the short takes a stunning angle on the subject. The young boy played by an unknown actor named Jordan James has no dialogue and still manages to say plenty with his sweet face. The tragedy of the story is, as always, its basis in reality. But despite the atrocity of subject matter, Krauss offers solace in the idea that maybe we’ll know better next time.