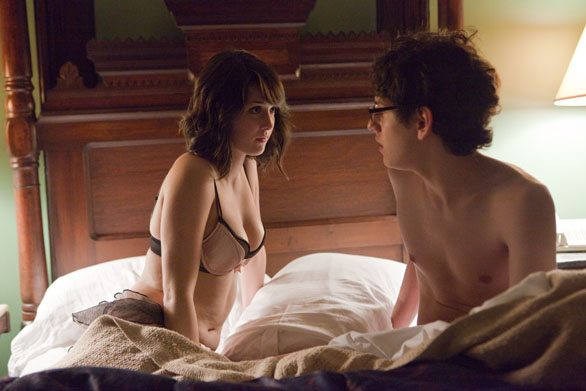 Still a virgin? Matt (Matt Bennett) is one in the new teen comedy, The Virginity Hit. But with a little help and manipulation from his friends, Matt just might lose it.

Sony purchased billboards across the country reading: Still a Virgin? And they haven’t gone unnoticed. The advertisements for a hotline number where Bennett and co-star Zack Pearlman guide you as how to lose your virginity are the cause of much controversy over the film.

“I figured it was going to be controversial, and it has been. I think people are going to be surprised by how touching it is. It’s not your typical teenage film,” says Bennett. Bennett fell in love with the story and the writers, Andrew Gurland and Huck Botko, when he first read the sides on the Long Island Railroad.

“It was one of the most magical things ever,” says Bennett. “I was like, ‘Who are these guys? Where did they come from? And why are they geniuses?’”

Having experience with both commercials and TV shows, Bennett’s expectations for the filming process were abandoned on his first day on set.

“They basically handed us a baseball bat and said, ‘Go!’”

Bennett was surprised when the director told the actors to take the cameras and shoot some improvisational scenes on their own.

“We were always filming. It was very unorthodox but very rewarding,” tells Bennett. “It was professional, but it was the opposite of what I thought it would be.”

Bennett also appears on the Nickelodeon show, “Victorious.” Because his name is also attached to such a controversial film as The Virginity Hit, many are curious as to what his Nickelodeon producers are thinking.

According to Bennett, “They’ve been very supportive. Dan Schneider, the creator of ‘Victorious,’ was on ‘Head of the Class’ and Better Off Dead. He was a teen actor so he understands: ‘You’re an actor. This is what you have to do.’”

The Virginity Hit releases in select theaters Sept. 24.
Article posted on 9/24/2010
This article has been viewed 3672 times.

Interviews
James Bond producer: 007 ‘can be of any color’ but never a woman
1,685 views