Let Me In: Matt Reeves makes a mighty remake. 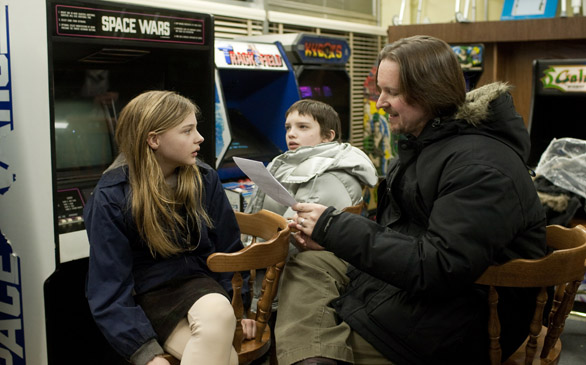 Chloë Grace Moretz, Kodi Smit-McPhee and writer/director Matt Reeves on the set of Let Me In
(Credit: Saeed Adyani)

Remakes are rarely viewed as a good thing by discerning moviegoing audiences. Think about it; why suffer through Mark Wahlberg’s Planet of the Apes when you can watch Heston’s? From Will Smith’s son attempting to fill Ralph Macchio’s gi to Gus Van Sant’s totally needless Psycho exercise, remakes are treacherous fare, which explains the immediate fan backlash over the announcement of Let Me In, an American reboot of the stunning, Oscar-nominated Swedish film Let the Right One In, based on John Ajvide Lindqvist’s novel of the same name.

This delicate horror film about an alienated and bullied 12-year-old boy (The Road’s Kodi Smit-McPhee) building a tentative friendship with his mysterious new neighbor (Kick-Ass star Chloë Grace Moretz) was decried from the moment it was announced, with the rally song pointing to the perfection of the first film, making a second movie, especially one coming so closely on the original 2008 film’s heels, needless.

It was a sentiment writer-director Matt Reeves (Cloverfield) shared in many ways, he admits.

“The one thing that made it easier to say yes is that the [original] movie hadn’t come out yet,” Reeves explains. “I’d fallen in love with it, but the world didn’t know about it. They showed me the movie almost a year before it came out in the United States, and I went through a long process of grappling with, ‘Should I or shouldn’t I?’”

Reeves says before making a final decision on whether or not to tackle the remake, he read the novel, spoke with the author and found he couldn’t shake his desire for the project.

“It crept under my skin. I couldn’t let it go,” he says. “It’s such a brilliant story about the pain of adolescence and coming of age.”

Able to work in a bubble for about a year and drawing on classic Steven Spielberg films like E.T. and Empire of the Sun for inspiration, Reeves delved into recreating the vampire film, setting it in 1980s New Mexico.

“But then the movie came out to tremendous acclaim,” he recalls, “and I thought, ‘Oh no! What are we doing?’ But I’d already written the script and was deeply, deeply connected to it. I knew the best thing I could do was just put my head down and not worry about fan reaction, but just remember that I myself was a fan and to stay true to the things I fell in love with.”

However, he understands concerns fellow fans might have over a retelling of the story.

“It had been done so beautifully, and the relationship between those two kids was so wonderful,” Reeves muses. “One of the things I love about Lindqvist’s story is that it has all of this complexity and ambiguity, there’s light and dark, real tenderness but dark primal stuff. As a fan of [the first] film, if I saw an American remake and it was watered and dumbed down, it would be pointless because what is so special about this story is the complexity and resonance of it.”

The microcosm of Hollywood very often reflects a central theme of Let Me In, a land where the bullied become the mighty. Considering it’s such an important element in the film, I point out to Reeves that he was bullied about his film by fans.

“I guess that’s true,” he laughs. “But we didn’t have any direct encounters in the bathroom.”

He says he thinks people’s reticence to embrace the project came from the best intentions.

“To be on the outside and know something that you so loved is being remade, you would immediately think the worst. If I’d been on the outside, I would have thought the worst too. If you look at remakes, for the most part, they’re terrible. I get that protective feeling. Lindqvist’s story inspires that kind of passion. Those bullies were just trying to protect the story [from] being picked on by Hollywood.”

Unwilling to draw comparisons between his film and the original, even though Let Me In is garnering mighty praise, Reeves simply says, “No matter what anyone thinks of [my] film at the end of the day, that Swedish film will always exist and I hope people will view this film as another expression of Lindqvist’s story, one I felt passionate about.”

Let Me In releases in theaters Oct. 1.