The Social Network: Ninety-Nine Takes to Get to the Top 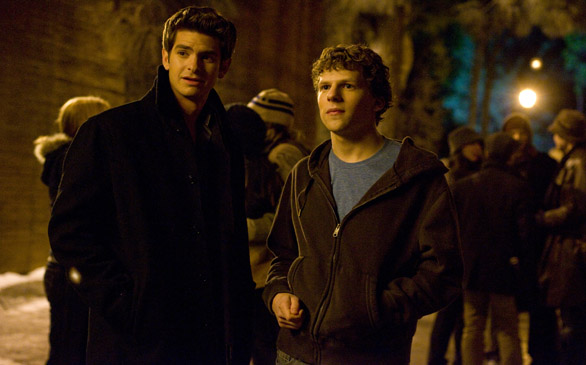 Amongst greatness, the best and brightest flourish.

Could that be a slogan for an Ivy League enclave? Absolutely, but it’s also what makes The Social Network, set in the hallowed halls of Harvard, one of the best films of this year, if not the decade (though it pains me to side with Peter Travers in such gushing praise).

Consider the film’s pedigree: written by Aaron Sorkin (“The West Wing”), directed by David Fincher (Se7en, Fight Club) and starring Jesse Eisenberg, Justin Timberlake and newly minted megastar Andrew Garfield (aka Spider-Man 2.0). The Social Network, an adaptation of Ben Mezrich’s 2009 book about the founding of Facebook (The Accidental Billionaires) is a parade of some of Hollywood’s most captivating talent turning in work of the highest caliber.

On a balmy September afternoon in Manhattan, Sorkin, Timberlake and Eisenberg settle into embossed leather chairs at the Harvard Club under oil paintings of white-haired men sporting General Custer mustaches and taxidermy, including an elephant head, trunk flaring, to discuss the film that is already considered a sure Oscar contender.

Sorkin has long asserted that his writing is simply people sitting in rooms talking, so how was he able to make mind-numbingly mundane moments, things like blogging and depositions, frenetic, wrought and pulsating in the film?

“Well, they’re not sitting in rooms talking. They’re standing in rooms talking, and that’s how I infuse it with a Michael Bay-type energy,” Sorkin deadpans. “My parents took me to plays starting when I was too little to understand what the plays were about, like ‘Who’s Afraid of Virginia Woolf?’ when I was 8 years old. Because I didn’t understand the story on onstage, I fell in love with the sound of dialogue. It sounded like music to me, and I wanted to imitate that when I wrote.”

Fans of the writer’s previous work will instantly recognize his hand in The Social Network’s opening scene, a patently Sorkin rapid-fire exchange which finds Facebook founder Mark Zuckerberg (Eisenberg) in the midst of a breakup conversation with Erica Albright (Rooney Mara).

“I wanted to start out at 100 miles an hour, in the middle of a conversation, so that the audience would have to run a little just to keep up with us,” Sorkin explains. “And then sequences like the one that follows where Mark is blogging, drinking and hacking; David shot it and cut it and [Nine Inch Nails frontman] Trent Reznor scored it like it was bank robbery, like an action sequence.”

“We performed that scene 99 times,” Eisenberg points out quickly and without venom. “[Fincher] refused to do it the extra time to make it an even hundred. For an actor, that’s what you want. That’s what’s thrilling.”

“That was David’s process,” Timberlake interjects. “Working digitally with this film,” which was shot on a Red One camera. “It was almost like he would use the first 20 to 25 [takes] as a rehearsal, and if something good came out of it, it was more of a fluke in his mind than what he was trying to get. You’d get to the 25th or 26th take, and he’d say, ‘Great. Print that. Erase everything else.’ And you’d be like, ‘Whoooa! Wait. Really? OK, so we’re starting over?’ But while feeling like you were running wind sprints which turned into a marathon, it was freeing to be a part of that process.”

“We’re asked about the great number of takes as if the actors are in opposition to it,” Eisenberg says. “Every actor I know would stay there all day if there was film in the camera. This film was a blessing, and we were thrilled for the time we got actually acting and not sitting around waiting to act.”

“David didn’t believe in frills or bells and whistles,” Sorkin says. “On this movie you sat on the floor when you weren’t working. David doesn’t like to spend money if it doesn’t go on screen.”

“The money for this film went to the time to make it,” Timberlake adds. “It’s so amazing for a director to say, I want time for my actors to act and for me to watch them act and direct them. He’s one of the bravest directors you could ever be lucky enough to work with.”