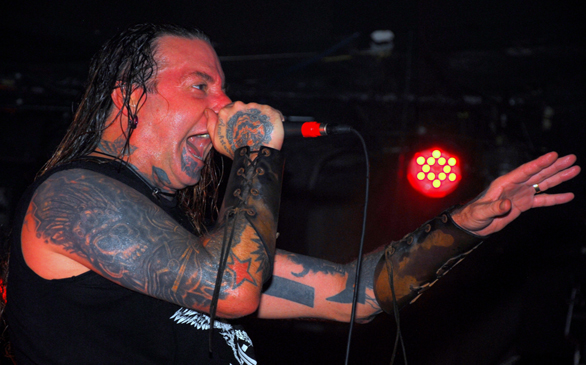 After finishing their summer stint with Ozzfest, DevilDriver unleashed a cross-country tour in support of their latest album, Pray for Villains. As they walked onto the stage, eager fans waiting for chaos expelled loud roars and screams of excitement.

Kicking off the 70-minute setlist was “End of the Line.” Frontman Dez Fafara exploded with energy as the death metal band punished their instruments across the stage. A sea of arms extending devil horns decorated the packed crowd after every song.

Fafara demanded complete anarchy and destruction as he interacted with the crowd, ordering everyone to drive their inner devil out. Bassist Jon Miller tossed his hair around like a whirlwind. Dual guitarists Mike Spreitzer and Jeff Kendrick unleashed insane sounds with their hands sliding down the strings faster then the eye could follow. Drummer John Boecklin completely annihilated the drum kit moving at the speed of light, and the audience still demanded more.

Halfway through the show, a thick layer of sweat could be felt in the air from the exhaustion of the audience. Fafara paused and directed the crowd to unleash the biggest mosh pit the Key Club had seen as they played “Meet the Wretched.” Bodies collided with each other, and a few others reacted by crowd surfing.

The interaction between DevilDriver and the masses was maniacal. Chants and requests for songs broke sound barriers for the L.A.-based group. As the last song began, Fafara signaled for another pit as the uncontrolled crowd replicated hurricanes spinning out of control.

It’s impossible to leave without bruises after attending their show.