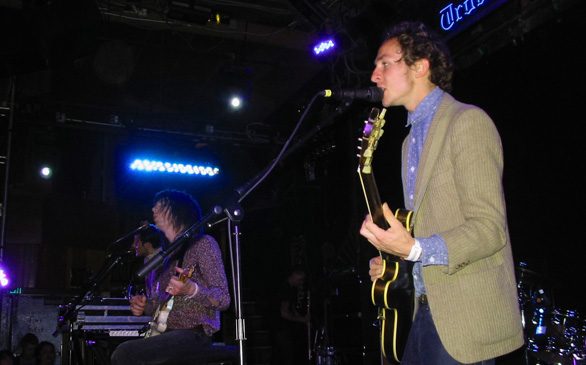 Can I just begin this review by stating how truly heinous it is that a band like the Mystery Jets, having released a slew of CDs and EPs over the course of their none-too-shabby career, can still play a venue the size of the Troubadour (no offence, Troubadour, I do love you). That said, it was truly a treat to see a band of this caliber in a venue barely larger than my apartment.

Admirably, frontman Blaine Harrison, who uses crutches to get around due to spina bifida, makes it down the steep steps from the backstage area to take his perch stage center. His stage presence is huge and clearly there’s a reason why the ladies have staked out their ground directly in front of him early on in the evening.

The band launches into “Alice Springs,” the opener of their most recent release, Serotonin. It’s an explosive number that instantly sets the crowd into motion. “Young Love” immediately follows with multi-instrumentalist William Rees taking up lead vocal duties, and Harrison filling in the lady lines performed on the recording by Laura Marling. Oddly enough it doesn’t sound a bit silly and goes over well.

“Serotonin” is remarkably tight live, with Harrison and bassist Kai Fish’s tandem verse vocals locking firmly together in contrast to Harrison’s urgent wail on the chorus. “Half in Love with Elizabeth” is fun indie-pop and the older favorite carries well into their recent single, “Dreaming of Another World.”

The sparse and gut-wrenching “Flakes” is every bit as beautiful live, and if I’d had a lighter, I might have been tempted to make a jerk of myself waving it around. “Flash A Hungry Smile,” “Undercover Lover” and “Show Me the Light” bring back a more lively groove. “Melt” is sublime, the perfect love ballad for the girls packed in front to swoon to while “Two Doors Down” follows that, offering a slightly more lighthearted side of infatuation.

“Behind the Bunhouse” is eerie and energy charged, building from distortion and mournfulness into a highly charged finale as the band conspires to destroy the drum kit and anything else they happen to be able to topple that gets in their way. Finally in a show of solidarity, Rees swoops Harrison up into his arms to carry him up those pesky steps and the entire ensemble ascends again, in the din of chaos. So much for ADA compliant venues … next time hopefully we’ll get the encore.