Jenny and Johnny: Q & A with Johnathan Rice 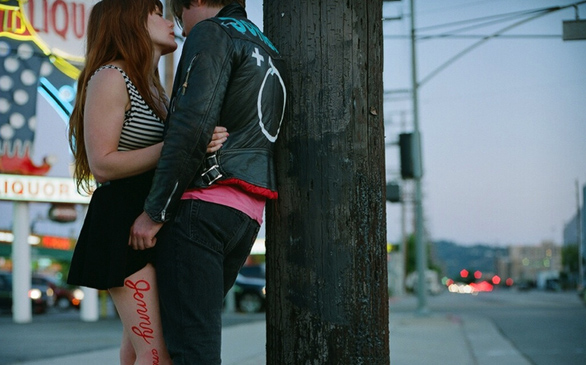 Duet albums, once old-fashioned, have officially made the leap into cool with the arrival of Jenny Lewis and Johnathan Rice’s new offering, I’m Having Fun Now. Longtime collaborators and real-life couple, Lewis and Rice counterbalance nicely on vocals, each playing and building on the other’s strengths.

The project sprung after the duo, tired of incessantly playing Bob Dylan covers together, decided to create their own music instead. Unlike their solo work, I’m Having Fun Now has a voice all its own; hence, the nom de plume “Jenny & Johnny.” Short and sweet at just 35 minutes, the songs on the album whiz by in quick and delightful succession so that, as soon as the CD ends, you find yourself starting over at the very beginning.

What is your favorite album of all time?

Johnathan Rice: My favorite album at the moment is Miles Davis’ Bitches Brew.

Time Out of Mind

Do you have a favorite Dylan song?

“Girl From the North Country”

What about a favorite book?

Do you have a favorite place?

Mint Chip, like the ice cream, is the name of my house.

What about a favorite restaurant?

Who are your musical influences?

Name a dead musician you wish you could have had the chance to play with?

Who else would you like to collaborate with in the future? Or duet with?

I’ve been pretty lucky in my collaborations thus far – Jenny Lewis, Elvis Costello – I don’t want to jinx it.

What’s your favorite duet of someone else’s?

I love the song “Some Velvet Morning” with Lee Hazlewood and Nancy Sinatra.

Any real musicians you’d like to play in a movie besides Roy Orbison?

I don’t know how well that worked out. I felt like I walked around looking really weird.

It would have to be the right thing. I would do it again if was something cool.

I don’t know. I’d like to think I haven’t written my best one yet.

What song do you wish you had written?

There are a million of those – “Tumbling Dice” by the Rolling Stones.

What’s your favorite place in Scotland?

The east end of Glasgow – Dornoch Street. That’s the street my grandfather lived on.

I love the song “Acid Tongue.” I really like that one.

What’s the best concert you’ve ever been to?

I’ve been to a lot of great ones – Rage Against the Machine at the Palladium. It was like an angry Bob Marley, if he was super pissed and hadn’t smoked weed in seven years.

What was your first concert?

Peter Harvey and U2. That’s almost as good as Jenny’s first, which was the Cure and the Pixies.

What is your favorite venue to play in?

Last question, do you have a favorite L.A. spot?

I’m Having Fun Now is currently available. Jenny and Johnny perform at the Palladium Oct. 3 and the Troubadour Oct. 5. For more information, visit jennyandjohnnymusic.com.