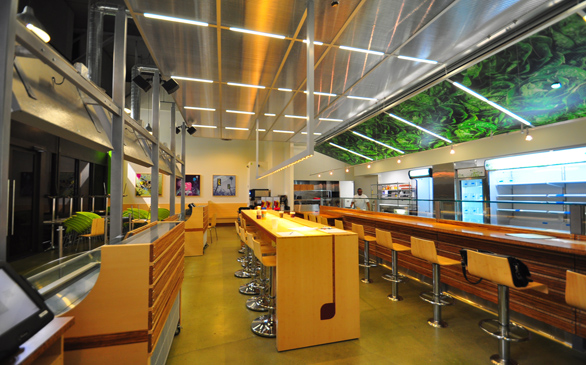 When I say that I’m a salad enthusiast, that’s an understatement. So when I heard that a new Greenleaf Gourmet Chopshop was opening, I jumped at the opportunity to check it out. Their newest eatery opened Aug. 23 in the hustle and bustle of Century City.

When you want to break for something to eat and don’t have the leisure of taking a two-hour lunch, bleeding your wallet or blowing your week’s worth of calories in one meal, Greenleaf Gourmet Chopshop is the place for you. An eco-friendly neighborhood concept spot that offers signature salads, sandwiches, pizzas, hot entrées and sides, the best part about Greenleaf is that you leave feeling good about what you just ate.

Jonathan Rollo, Commander-in-Leaf (owner) and head Chef Kristi Ritchey opened up their first location in Beverly Hills about two years ago and realized that they had struck gold.

“I feel unbelievably fortunate that our first spot took off the way that it did and even better than we thought it would,” expresses Rollo.

Originally Rollo wanted to do a fine-dining concept but after working in the business for a while, he wanted to take his idea in a new direction.

“It’s not the way I eat or my friends eat all the time and I think it has to do with lifestyle. I like the idea of going to a place often and eating my way down the menu,” reflects Rollo. “Our whole spin on what we do is trying to find healthy solutions for really great food,” continues the Commander-in-Leaf. “Kristy lost 110 pounds and her own story is so inspiring. She’s given this place her heart and soul.”

Rollo and Ritchey realized that people were craving healthy options for food that wouldn’t break the bank and in an area that lacked healthy and creative selections.

“People were walking to the mall and sick to death of it so this was great for us. It’s a nice compliment to have such enthusiasm,” beams Rollo.

The foundation of their menu is their signature salads like traditional Cobb, Caesar or you can build your own with a list full of options.

Ritchey adds, “This was the original menu, what we became known for, our gateway salads to bring people in, then we started to expand the menu and add new components.”

A new addition to their menu is pizza. I was able to try the wild mushroom and truffle pizza. Sounds like it would be chock full of calories, but guess again! It’s a 10-inch whole wheat tortilla that’s simply 130 calories, and with all the components added it’s a whopping 300 calories, which you can’t beat. It starts out with a goat cheese spread, caramelized onions, sautéed mushrooms, baby arugula, pecorino Romano, red pepper flakes for a kick and truffle oil for a little decadence.

“It took six months to come up with a flavorful pizza that was high in fiber, low carb and full of flavor,” Ritchey encouragingly states.

Rollo adds, “It’s fun for us to approach it from a lifestyle and culinary point of view.”

Overall, it’s a great local spot that leaves you open to going back again knowing that you can create something new each time. There are so many different options for your salad from the varieties of lettuce, the diverse toppings and many dressing options you can choose from to satisfy your savory and sweet senses.

If you feel in the mood for something other than a salad, you can grab their turkey burger or pizza.

“I would love to see eight-10 of these places thriving throughout L.A., then total domination of the world!” Rollo enthuses.

Budget
The ECOLunchbox is an eco-friendly food storage solution for people on the go
2,010 views

Budget
Mexicali Taco & Co.: Everything But the Tacos
4,318 views

Budget
Tom Bergin's: "Where Everybody Knows Your Name"
2,655 views