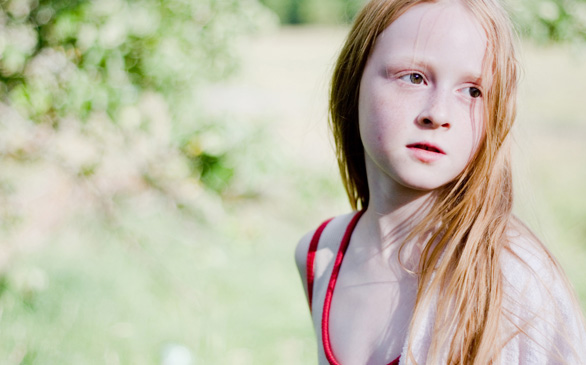 Blanca Engstron as “The Girl”
(Credit: Courtesy of Olive Films)

It’s hard not to love a young protagonist with cute freckles and shaggy, strawberry blond hair who also has the audacity to survive home alone. We fell first for face-slapping cutie Macaulay Culkin in Home Alone if you can remember that far back. The film was such a hit because it is such a fascinating idea when you are a kid yourself. It is an outright frightening for any good parent because children will be mischievous children.

Our modern-day Kevin McCallister is a 10-year-old girl known formally as just “The Girl” (I know, very existential of them) who is left with her bohemian aunt during the summer of 1981 while her parents travel to Africa as aid workers. She is then left by herself when her aunt is courted and escorted for a holiday with a man, promising to return in a few days.

The summer begins to slip slowly by as the Girl spends her time by the lake with her friends, catching tadpoles and singing pop songs. The Girl is a normal, albeit lonely, child whose innocence also allows her a degree of intuition.

However, she is also soaring farther and farther from the reality of her situation. With her long, ginger locks and stern expression, the pre-adolescent is a blatant representation of the conflicting aspects of childhood. Expected to grow up at an unhealthy rate, the Girl learns love and loses it, forcing her into the absurd and insensitive world of adulthood.

The tragedy of the the Girl is not her fate, which is both appalling and unacceptable to our sense of societal norms. She is another forgotten child whose trivial life is confined to the fantastical realm run by the illogical and bizarre adults around her.

Swedish director Fredrik Edfeldt guides his first feature film with the composure of a much older film veteran. Light and dark play almost in unison as the color palette, wardrobe choice and set design complement the story better than the light score and added background music.

But it is Blanca Engstrom as the title character who instills an impressively aged wisdom for someone so young. The thorns in the bed of life’s roses hurt the older viewers more than, we presume, the Girl because of our own experiences with growing up by ourselves.