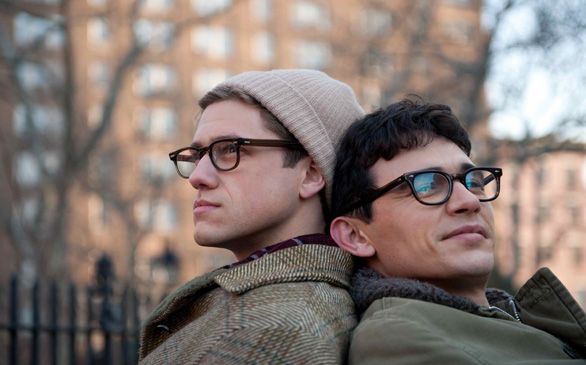 Even if you know only the basics about Allen Ginsberg and his poem that brought a storm of controversy, writers-directors Rob Epstein and Jeffrey Friedman have created a film that feels as if it might be its own work of poetry, albeit a visual, sporadic poem that will not stir nearly as many heads.

Allen Ginsberg was almost 30 in 1955 when his most famous poem Howl was released to celebrate his fellow “angelheaded hipsters” and to boycott the conformity and militaristic censorship that he and the rest of the Beat Generation artists criticized about the country.

Compared to, say, Britney Spears or Joe Francis, Howl is actually a tame read, one that emphasizes feelings of freedom and sexual excitement rather than promiscuity. However, the poem and its publishers were taken to court for its references to illicit drugs and both heterosexual and homosexual practices.

Howl (the movie) takes its audience from an interview with Ginsberg (James Franco in his most pervasive performance since Milk and despite an offensively awful beard) reflecting on the importance of his work two years after the obscenity trial. Other characters are mere props, like a dialogue-less Jack Kerouac. Jon Hamm is the charming lawyer defending the publishers and who interrogates a star-studded round of witnesses like Mary-Louise Parker and the caricature actor, Jeff Daniels.

As Ginsberg is pictured reading the work that was pivotal to the counterculture movement, his voice is accompanied by segments of animation that, however primitive it may initially look, grows slowly on the viewer and breaks the monotony of the courtroom scenes. It is rather cheesy at points, playing to its intended audience of artists who will drink up the metaphors like sexually infused water.

The film is barely 90 minutes, but it feels much shorter. Though thoroughly enjoyable and incredibly interesting due primarily to its historical relevance and spitting portrayal of its characters, the film can sometimes feel a bit like something your teachers would show in high school English class to accompany the weeks spent teaching the Beat Generation. Howl is invested in portraying Ginsberg and his work as they really were without frivolous additions or overdramatization.