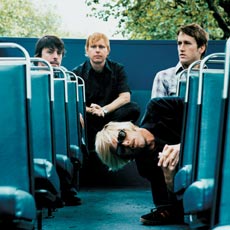 The Foo Fighters are poised to release their fourth studio album, the highly anticipated, One By One (RCA Records) on October 22. For those of you who have been living under a rock for the past few years and don't own a television or listen to the radio, the Foo Fighters are not the latest incarnation of children's crime-fighting, action-heroes but are a group of highly talented musicians (Taylor Hawkins on Drums, Nate Mendel on Bass, Chris Shiflett on Guitar and Dave Grohl on Guitar and Vocals) known to put on some of the best live shows in the country -- hands down!

Still more curious, the name, Foo Fighters, actually has an interesting history. Near the end of WWII, the U.S. Air Force patrolling German airspace encountered balls of light. These unidentified flying objects came to be referred to as "Foo Fighters," or "Kraut Balls" by those who believed the objects were a secret German weapon. Perhaps Grohl, who started the band in 1994 when he recorded all the instruments for the self-titled debut, thought Kraut Balls sounded like some sort of bad appetiser? In any event, Grohl explains the band's strange formation. "The first record was supposed to be a demo that was gonna be released on my own label," explains Grohl. " I decided to call it The Foo Fighters so that people would think it was a group -- not just one person." However after hearing Grohl's music, Pat Smear (Guitar), William Goldsmith (Drums), and Nate Mendel (Bass) decided to form the first line up with Grohl (Vocals, Guitars). Later, Pat was replaced by Franz Stahl when he left the band, and in 1999, Franz was replaced by Chris Shiflett. Grohl continues to explain, "Normally, you get it together, write some songs, come up with the perfect group of people, and then you go and make a record when you're solid." In the case of the Foo Fighters, it was more like spontaneous combustion.

"Having the foundation be so strange and having to grow up in public is kinda weird." Grohl admits. He goes on to explain that things really started to click when Taylor Hawkins (formerly with Alanis Morisette's touring band) joined the Foo Fighters, "Taylor's like my brother. We were friends before he joined the band. When I asked him to join, he didn't need to audition. I went to his house, and he played for like 15 seconds, and my ears were GONE! Not only is he a good drinking buddy, but he's a kick-ass drummer. With Nate, we could never have another bass player 'cause no one could do what he does. And again, the relationship Nate and I have musically is unspoken, it just kind of happens."

This terrific union is one of the factors in creating such memorable shows. Still, Grohl admits that both he and Hawkins feel incredibly nervous before live performances. "The two of us used to sit back stage on the verge of nausea going,'Why are we doing this?'" It's hard to imagine a talent like Grohl being nervous about anything when it comes to music. Not only is he a terrific singer/songwriter, but also is one of the most amazing drummers around, having influenced countless other artists. In the early '90s, he began his notoriety as drummer for Nirvana when they exploded onto the rock scene and recently hooked up with contemporary rockers Queens of the Stone Age on their third album, Songs for the Deaf. And despite a brief stint drumming for Jack Black and Kyle Gass on the Tenacious D album, Grohl has predominantly stayed with the hard rock aesthetic for his work as the leader of the respected Foo Fighters. When asked about the differences of being a drummer versus a singer, Grohl explains, "One of the things that is so great about playing the drums is that you get to hide in a weird way and really lose yourself in it....But one cool thing about playing guitar and singing is that you can just freak out. I can scream my balls off, ditch my guitar, run in the audience and whatever."

Since 1995, The Foo Fighters have created quite a notable body of work including: Foo Fighters '95, The Colour and The Shape '97, There Is Nothing Left To Lose '99, which have been both commercially and critically successful. In addition, the group has been very active, contributing music for several soundtracks (Scream 2, Godzilla, X-Files TV Soundtrack, Songs In The Key Of X (X Files Soundtrack), Varsity Blues, MI:2 Mission Impossible 2, Me, Myself & Irene and more recently Orange County. Also, Grohl wrote the entire score for the Touch Soundtrack, has appeared on the "X-Files" television show and even directed several of the groups videos, including the new video for the single, "All My Life," a real rocker that opens with the jarring vocals, "All my life I've been searching for something-- something never comes, never leads to nothing. Nothing satisfies, but I'm getting close...closer to the prize at the end of the rope." It certainly does seem like the prize is dangling ever closer with an album that is sure to solidify the group's standing as rock greats.

For Grohl, as with all the members of the Foo Fighters, it's all about the music. They seem totally unaffected by their tremendous success and aren't afraid to show their silly sides as Hawkins demonstrated on an episode of MTV's "Cribs" showing his pink bedroom curtains. Aside from looking like he could be Brad Pitt's younger brother and having been linked to some big-time Hollywood actresses, Hawkins reminds us he's just a regular dude at heart. He is responsible for coining phrases like, "flober," his definition of when you fuck something up (example when you drop your drumstick in a chorus or something). Taking it a step further, Grohl explains that he doesn't understand the myth of the front man. "I'm in bands. I don't have that crazy star persona like other front people. I like watching people on-stage that all share the same responsibility -- that is to rock. If I weren't on-stage, I'd be in the audience rockin' out to whatever's going on."

These guys are just so refreshing, why I'd even say," They're Foolicious"!!

The Foo Fighters will be performing in two sold out Los Angeles shows on October 22 and 26 as part of their North American tour. In addition, they will be embarking on an extensive European tour in November, ending with dates in Australia in early 2003. For more information, check out foofighters.com where there are also links to the top 50 fan sites.